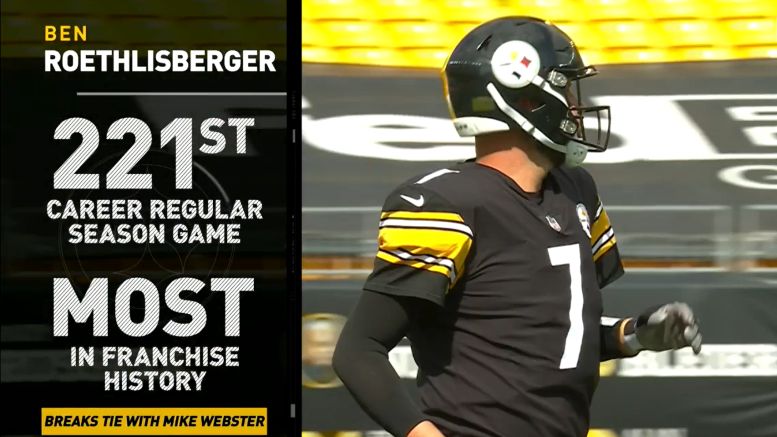 When Ben Roethlisberger took the field today, he played in the 221st game of his career, all of them as a member of the Pittsburgh Steelers, going from 2004 all the way to the present day. That is now one more than anybody else has ever played in franchise history, surpassing Mike Webster for that honor, though the latter would play 25 more games with the Kansas City Chiefs.

“It’s such an honor to be up there with that name, with Mike Webster, what he meant for this franchise, the Hall-of-Famer, the person, and we all know the story, but what he did”, Roethlisberger said about reaching that milestone after the game. “He’s Iron Mike for a reason. They’re never gonna call me Iron Ben. I get that. There’s only one Iron Mike, and I’m just humbled and honored to be in the same category as him. It’s not like I passed him; I just feel like I joined him today”.

This was a mark that he was supposed to hit in week five last season against the Los Angeles Chargers, but he had a career-threatening injury to his throwing arm. He had three tendons snap in his throwing elbow in the second game of the year, ending his season and requiring surgery.

That was quite a scare, but he has come back to play overall pretty well so far, even if he has some room to improve. He does have a 7-1 touchdown-to-interception ratio so far, throwing at least two touchdown passes in every game so far. And the offensive line, despite the changes upfront, have held up for the most part so far, a fact Roethlisberger was quick to point out.

“Really, it’s not me, it’s all the guys that I’ve played with, especially the o-linemen, because they’re the ones blocking for me”, he said. “And I’ve played with so many really good linemen and tight ends and backs, and guys that have just kept me upright and allowed me to play this long. So I’m just thankful to all of them. This kind of record really is a joint thing to all of them and me”.

Of course, he took many a beating in the early stages of his career, before the offensive line started improving with the development of players like Ramon Foster, David DeCastro, Kelvin Beachum, Marcus Gilbert, and Alejandro Villanueva—later Matt Feiler and others.

And he has had an important part to play as well. He has developed into one of the quickest-release passers in the game, routinely averaging under 2.5 seconds from snap to throw. His linemen still know that they have to protect through the whistle, because he still makes those off-script throws at times, but so much has changed from his early days.

And it has changed in the ways that have needed changing in order to allow him to continue playing at a high level. That’s why he’s here today, not only celebrating another win, going 3-0 on the season, but doing so in the 221st game of his career, the most in the history of one of the most storied franchises in football.