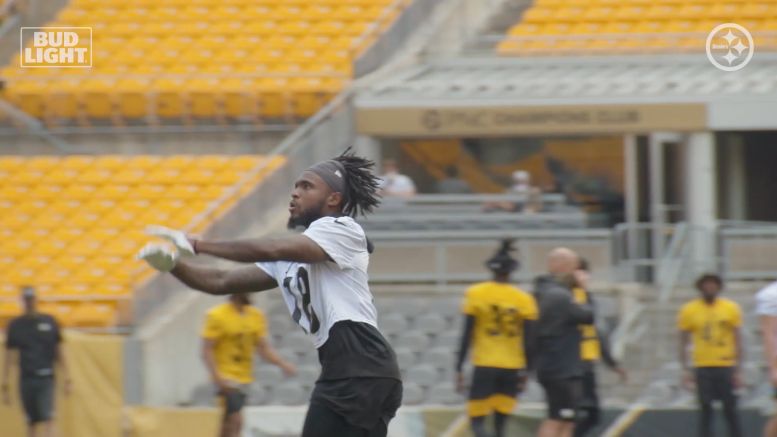 We have been given every reason throughout the offseason to believe that Pittsburgh Steelers quarterback Ben Roethlisberger should look like the same player he has always been back out on the field this year, at least as he gets the opportunity to knock off some rust.

After recovering from surgery to reattach three torn tendons in his throwing elbow, he claims to be feeling better than he has in over a decade, with no pain when he throws. He is also in better shape physically than he has been in a number of years, and has done a considerable amount more throwing than he has previously.

That won’t make up for the fact that he has hardly worked with the majority of his supporting cast of skill position talent before, however. Outside of JuJu Smith-Schuster, James Conner, and Vance McDonald, he has fairly minimal experience working with the rest of the group.

That includes Eric Ebron, who is new to the team, but importantly, also encompasses to team’s number two receiver, Diontae Johnson. But while he wasn’t on the field much with him in 2019, he did get the chance to get to know him from the sidelines.

“Diontae, I got to watch him last year and just, what an incredible talent”, he told reporters earlier today. “It’s been fun to actually get more reps with him and more plays, and I’m looking forward to getting an actual game feel with him, because I think the sky’s the limit in terms of talent with that guy. He’s fast, he’s quick, he can get open, he’s got great hands. He’s one of those receivers that you really look forward to playing with”.

The 66th pick in the 2019 NFL Draft, Johnson played a bigger role during his rookie season than even he had anticipated. Donte Moncrief was brought in to serve with James Washington as the team’s starting receiver flanking Smith-Schuster, with Ryan Switzer also in the mix.

But by season’s end, it became clear that Johnson needed to be on the field—even if the Steelers had other options. Thanks to injuries to Moncrief and Switzer, they didn’t really have much choice to play him anyway, but he became their most productive wide receiver down the stretch.

Johnson only played a combined 50 snaps in the first two games of the 2019 season, some of which came after Roethlisberger had already left the game in Week Two. He received a total of nine targets with four catches for 42 yards, with one 17-yard completion and three targets coming from Mason Rudolph.

Not only did Roethlisberger get minimal time to work with Johnson on the field, the rookie was injured through much of his rookie offseason, and this year saw the offseason greatly reduced due to the pandemic. Despite all this, I remain confident that they will build a quick connection.