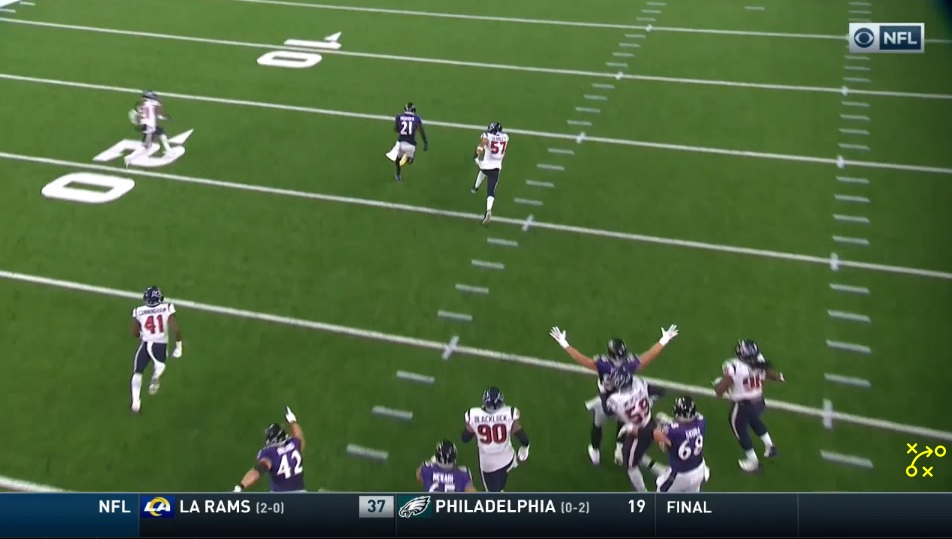 Baltimore comes out with four wide receivers and a tight end while Houston counters with their Dime package.  They are in a Cover 3 look with Zone underneath.

The Ravens have Miles Boykin (80) wide left with Marquise Brown (15) in the left slot. To the right they have James Proche (11) out wide, Willie Snead (83) in the slot and Mark Andrews (89) in the tight slot.

The play starts quickly while the Texans seem to be still milling about. Proche and Brown run deep routes with Brown garnering double coverage. The Texans essentially have 4 defenders deep for two routes. This leaves 2 defenders underneath to cover three receivers and all end up open.  Boykin runs a 9 yard Stop route and is open to the left with Roby worried about Brown. Snead will run a short Curl and slide to the middle away from the linebacker and in front of Moore.  Andrews will run and Over route behind Moore who is reading the QB.

Lamar Jackson (8) shows fantastic anticipation throwing this ball when Andrews is on the right hash before he has crossed behind Moore and hitting him 3 yards outside of the left hash. Andrews gets a block from Boykin while heading up the sideline for a 29 yard gain

Steelers Scenario – First of all the Steelers have yet to use the 01 personnel group so far this season. They could use James Washington for the Stop route and Diontae Johnson in the slot to the left.  To the right you have Eric Ebron run the Over route, JuJu Smith-Schuster on the Curl and Chase Claypool out to the right running the Go versus one on one coverage.

The Ravens are in 11 personnel with trips to the left and Houston is in there Nickel grouping with a Cover 4 look to protect against the deep pass.

The Ravens will line up with two receivers to either side with rookie running back J.K. Dobbins (27) flanking Jackson to the right.  Andrews again is in the tight slot with Snead to his right. Boykin is in the slot to the left with Brown wide left. When Houston goes to Nickel they move starting safety Murray into the slot and put Johnson in as a deep safety.

Before the snap Snead will motion left to the tight slot. This play is designed to overload the left side of the field and based on the coverage Jackson will again have more than one open receiver from which to choose. Snead and Boykin will run go routes and take both safeties and DB Roby with them.  The linebacker Zach Cunningham will widen to keep an eye on Snead in case he runs a shorter route and his drop takes him 9 yards deep allowing Andrews to run underneath on a shallow cross and have no one within 7 yards of him.  On the outside Brown will run a In route 18 yards deep over the top of Murray and underneath the retreating deeper DB’s.

Jackson makes a nice throw over the linebacker just inside of the numbers and Brown adds a couple extra yards for 25 yard gain.

Steelers Scenario – This year in 11 personnel the Steelers have most often used Washington, Johnson and JuJu. At tight end they have split the reps with Ebron getting about 60% of the snaps. For this play you run Washington and Juju on the deep routes with Johnson running the deep In. Either TE could run the shallow cross and like the clip shows against this defense there could be multiple options.

The Ravens are again in 11 personnel with two receivers to the left and one to the right. Houston is in there Nickel defense showing a single high safety look.

Boykin is the WR split wide left with Snead in the slot left.  Brown is split wide right with tight end Nick Boyle (86) on the wing to left with Dobbins flanking the QB to the left in the backfield. The Texans have their Nickel grouping with Murray in the slot right and safety Reid lined up at left outside linebacker.

Pre snap Boyle with motion across formation to the right and this gets the trio of linebackers to shift to their left.  This play is an RPO (run pass option) as you’ll see the left guard and left tackle pass blocking while the rest of the offensive line and the tight end are run blocking.

Jackson will puts the ball in the belly of Dobbins with his eyes up reading linebacker Benardrick McKinney (55). If McKinney holds his ground he’ll give it to Dobbins but he flows with the run opening up the throw to Snead on the backside or to Boykin if the first option is covered. Snead will slightly angle his route to the outside to get Murray moving that way and then cuts it inside for an easy catch.  He spins off a tackle and adds seven more yards for a 22 yard gain.

Steelers Scenario – The Steelers would have the same personnel grouping as the previous play and this would be a play for JuJu in the slot.