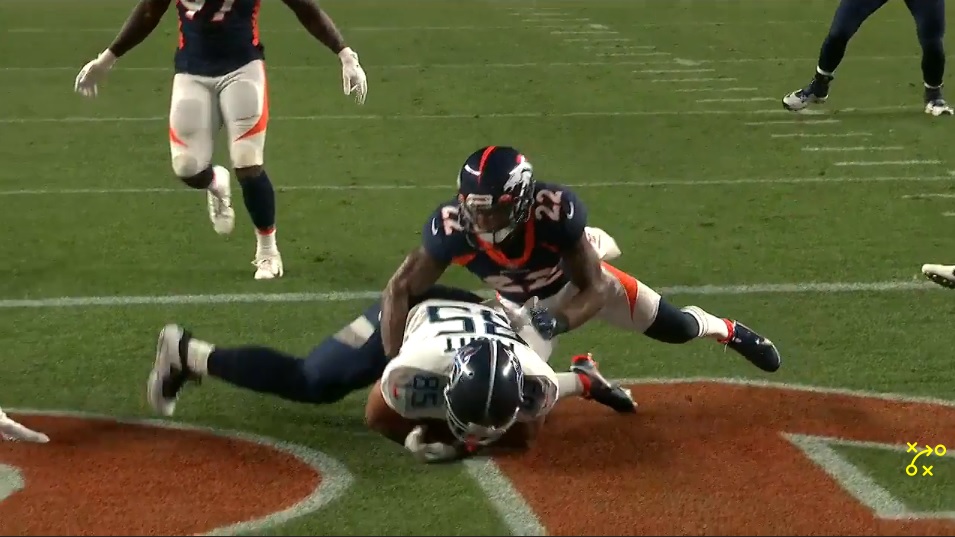 The Titans come out with 4 wide receivers and 1 tight end on this second and long play.  To the left you have A.J. Brown (11) outside, Corey Davis (84) in the slot and Adam Humphries (10) in the tight slot and to the right is WR Kalif Raymond (14). Tight end Jonnu Smith is (81) lined up on the right wing. The Broncos are in their Nickel personnel and will rotate into a Cover 3 look win Man coverage underneath.

The Broncos defense are in basic alignment with a Cover 2 look and at the snap will rotate SS Kareem Jackson (22) to the deep third outside, FS Justin Simmons (31) to the middle third and DB A.J. Bouye (21)to the deep outside third at the top of the screen. Underneath you have DB Michael Ojemudia (23), DB Bryce Callahan (29) and linebacker Josey Jewell (47) each matching up with their receiver to the near side.  All four WR’s are going to run Go routes with them all running deep to clear out space.

Smith acts like he is blocking the OLB Jeremiah Attaochu (97) before releasing him to turn back to the QB on the screen pass. In front of him he gets three nice blocks from RG Nate Davis (64) who kicks out linebacker Alexander Johnson (45),  OC Ben Jones executes a nice cut block to take out Simmons and downfield Raymond is controlling Bouye. The rest is Smith in space getting as much as he can. He’s 20 yards downfield before he is touched on the 22 yard gain.

Steelers Scenario – The Steelers could use any of their tight ends on this but I’d like to see Eric Ebron on this play as he is the quickest of the bunch.

The Titans line up with a tight end on each wing and a WR in the tight slot on each side. Derrick Henry is the lone running back. Denver is in their base defense.

Play action is a big part of Tennessee’s offense and this is a good example.  This play is designed to look like an outside Zone run to the left and from the end zone view you can see it clearly.  The offensive line is all going to slant to left with QB Ryan Tannehill opening to his left to show the ball to Henry.  Tight end Smith is going to slide across formation to the right to block the backside defender defensive end Dre’Mont Jones (93). This is just a three man route with Brown, the WR to the left, running a corner route. Tight end MyCole Pruitt (85) lined up on the right wing will block initially and then release to the right flat. Davis will run an over route to the left side.

The play action takes the linebackers with it as the defensive front all slide to their right. The DB’s drop into their Cover 3 look leaving FS Simmons on Davis in Man coverage.  Davis is able to beat him to the outside for an easy pitch and catch for a 20 yard gain. Three of the top five plays based on yardage gained were versions of this play.

Steelers Scenario – When the Steeler ran 12 personnel last week the receiver were usually Juju Smith-Schuster and Diontae Johnson.  Put Vance McDonald in the in the Smith role as he is a better blocker and use Ebron to release to the flat. Use Johnson on the deep corner route and JuJu on the deep over versus the free safety.

Tennessee is aligned the same way as they were on the previous play but this time they have a WR on the left wing with the TE on the right wing along with a WR in the tight slot on each side. Jeremy McNichols (28) is the lone running back. Denver is in their Nickel defense and again is in a Cover 3 deep but this time with Zone underneath.

This play is within the 2:00 drill so they don’t use play action here.  The routes are all simple but effective with Denver not wanting to give up a big play. Underneath, they will have Humphries on the left and tight end Anthony Firkser (86) running flat routes. McNichols will release through the middle to run a curl. And on the outside Brown to the left and Davis to the right are both going to run deep outs.

They’re just trying to keep the chains moving here and Tannehill has his choice as all of his teammates are open with Denver playing soft coverage. Tannehill chooses Davis to the right side and he makes a tough catch on the sideline