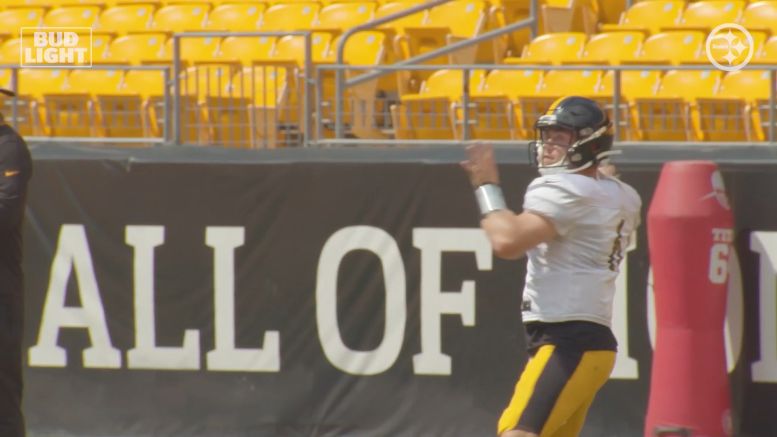 Headline: Settling on a third quarterback

It’s not often the case that a team has a particularly desirable option for their number three quarterback. In fact, this probably rarely comes up anymore, but once upon a time, there was actually an era of the game in which first-round picks were asked to sit. Ben Roethlisberger was going to start his rookie season as the number three behind Tommy Maddox and Charlie Batch.

This year, the Steelers’ number three is being decided between Devlin Hodges and Paxton Lynch, the second-year former college free agent who helped tank the team’s playoff hopes with three games left to play and…the veteran former first-round pick who wasn’t good enough in practice to show that he could manage any better.

Granted, Lynch was only signed a couple of games into the regular season, which put him at a disadvantage, and he was behind two novice quarterbacks who needed to soak up as many reps as possible.

But let’s be honest. If the coaching staff really saw a talented quarterback in him, they would have played him. They signed Mike Vick off the street to back up Ben in 2015 after Bruce Gradkowski was injured and they let him start over Landry Jones.

So far this training camp, Lynch doesn’t appear to have done himself any favors. We haven’t heard much about him, and when we have, it’s usually been negative, such as him having accuracy issues and then not even receiving reps.

We haven’t heard a ton about Hodges, either, which is actually somewhat interesting. We haven’t even gotten an interview from him, and he got interviewed a lot last year. I wonder if we’ll hear from him soon. For the moment, I would think he has the inside lane for the number three position largely based on the fact that Lynch has made no movement.