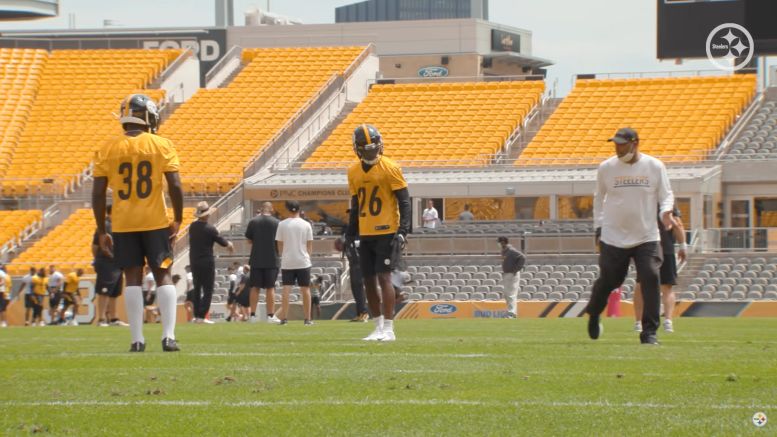 Reasoning: A rookie undrafted free agent out Florida Atlantic, James Pierre has generated some positive press during training camp. With the team recently releasing Alexander Myres, he figures to have a good chance to stick on the practice squad.

As it currently stands, the Steelers retain seven cornerbacks on their 80-man roster. It is entirely possible that we see them keep all seven of those, though only five may be on the 53. Those five would be Joe Haden, Steven Nelson, Mike Hilton, Cameron Sutton, and the second-year Justin Layne.

We haven’t heard a lot about Trajan Bandy, the other rookie undrafted free agent cornerback who is a slot defender, but James Pierre has been mentioned a few times, and usually in positive ways, finding some success, for example, in one-on-one drills.

At 6’2”, whenever you can get a player at that position with that kind of length who shows some ability, you want to see if you can work with him and develop him. That’s one of the reasons that they drafted Layne, who is also 6’2”, and is the only other cornerback on the roster who is taller than 5’11”.

“An early camp phenom candidate? Try 6-foot-2 cornerback James Pierre, who’s receiving a high number of reps for an undrafted rookie”, Bob Labriola wrote on the 24th. “Pierre did a good job in coverage of James Washington during the red zone period. On the final rep between the two, Pierre ran Washington’s route for him but dropped an interception thrown into his gut”.

It is, perhaps, worth mentioning that he also spent some time working on returning kicks and punts. While it would be incredibly unlikely for him to make the team as a return man right now, as the saying goes, the more you can do…

Another point worth noting is that Pierre can play both cornerback and safety, something that he did in college. Though 23 now, he also declared for the draft as a redshirt junior.