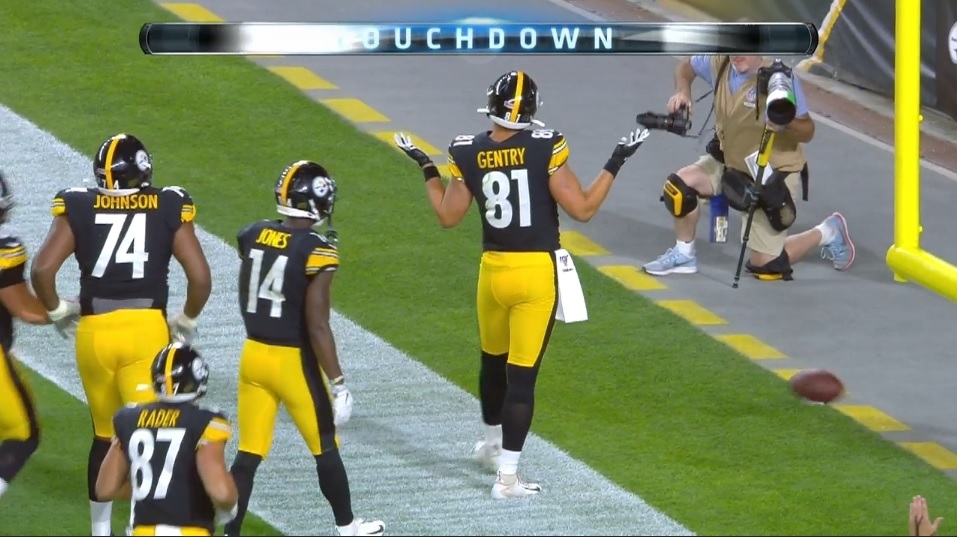 Here is preseason version of Ten Takes that will be split into two parts.  There will be one about the offense and one about the defense. This will be 5 thoughts on each about the roster and preseason and what to keep an eye on over the next four weeks.

1. It’s a Smallwood After All – The addition of Wendell Smallwood to what was already a pretty crowed group was an interesting one. It tells me that the Steelers were not completely happy with the depth of this group. There are essentially 4 players for one spot on the active roster and Smallwood poses a threat to each of them. Jaylen Samuels’ best trait is being a receiver out of the backfield and Smallwood has experience there with 56 receptions for 452 (8.1 yards per reception).

Trey Edmunds is most productive on special team with 210 snaps and 6 tackles last year. Smallwood had 5 tackles in 221 snaps. Kerrith Whyte looks solid as a runner and returned kicks. Smallwood has averaged 4.0 yards over 233 carries and has a career average of 25.1 yards per return including a touchdown. He may be equal to or better than the combination of all three of the returning players. Dave Bryan has already put him in his latest roster prediction and he may be on to something. This will be battle to keep an eye on.

2. Size Doesn’t Matter – Hopefully they won’t see the field but I see it as a positive that the Steelers have three other quarterbacks that now have NFL starting experience behind him. All three have had their struggles but that is generally the case for all young quarterbacks. One thing that you often here from those that think that Paxton Lynch should be the backup quarterback is that his is big and has a strong arm.  Those two traits can help a quarterback but they are far from the determining factor.  I’m pretty sure Lynch has been big and had a big arm his entire time in the NFL and it hasn’t translated to wins.

Since 1980 there have been 4 quarterbacks in the NFL that were at least 6’7” (Lynch, Brock Osweiler, Mike Glennon and Dan McGuire) and they have a combined record of 24 wins and 37 losses with 15 of those wins coming from Osweiler. This is by no means meant to be a vote against Lynch. Whichever QB’s show the most improvement in mental processing, decision making and accuracy regardless of height will win the job.

3. The Best Offensive Group – I am all in on the wide receiver group and especially the top three. The first key to that group is obviously the return of Ben Roethlisberger. As Michael Irvin has said on the Dan Patrick Show, wide receivers are “the most independent dependent people in the world.”

Wide receivers need quality quarterback play. If Ben is healthy and able to be accurate, these wide receivers are going to be able to impress. JuJu Smith-Schuster back healthy gives been the comfortable target. The guy he knows best who can move around the formation, can make the tough catch and has big play history.  Diontae Johnson, who has added weight, put up very good numbers last year and knows how to get open. He should make a big jump in year two. And Washington, in a recent photo, looks like he trimmed down.  He made big strides last year and we saw his confidence go up as the season progressed. I see big things for these three in 2020.

A long shot I like is Anthony Johnson. I like him coming out of Buffalo.  He was strong at the contested catch and has good size. With improvement in his ability to create space he could be a potential backup at the X position.

4. The Offensive Group That Worries Me – I think there are several factors that can cause concern along the offensive line. Other than David DeCastro there are questions at every other spot.

Starting in the middle Maurkice Pouncey is entering his tenth season and had struggles snapping from the shotgun last year being docked for 4 fumbles. A left guard it looks like they want Matt Feiler to take over for Ramon Foster. He handled himself well in one start there last year but changing positions can be difficult. Alejandro Villanueva will be 32 in September and that’s enough to worry me at left tackle.  It’s a demanding position and he hasn’t missed a game in the last four years. I hope the law of averages doesn’t catch up to him. At right tackle you’ll have a new starter and even with two solid candidates it could take time to gel with the squad.

The depth inside is pretty good but I’d expect them to look at possible adding a veteran swing tackle when the cuts start to happen.

5. TE3 – Going in to last year we knew Zach Gentry was going to take some time to develop. He was limited to 4 games last year and had one reception for 4 yards.  I am really curious to see the improvement he has made. If he can impress enough in the preseason to earn a helmet each week Randy Fichtner will be able to open the play book more and use some of the three tight end sets he used in 2018. The NFL loves to exploit matchups and you can do that with the 6’8” Gentry.  There was promise coming out of Michigan as he was still learning the position. Imagine a goal line package for 13 personnel with Vance McDonald, Eric Ebron, Chase Claypool and Gentry with all at least 6’4”.