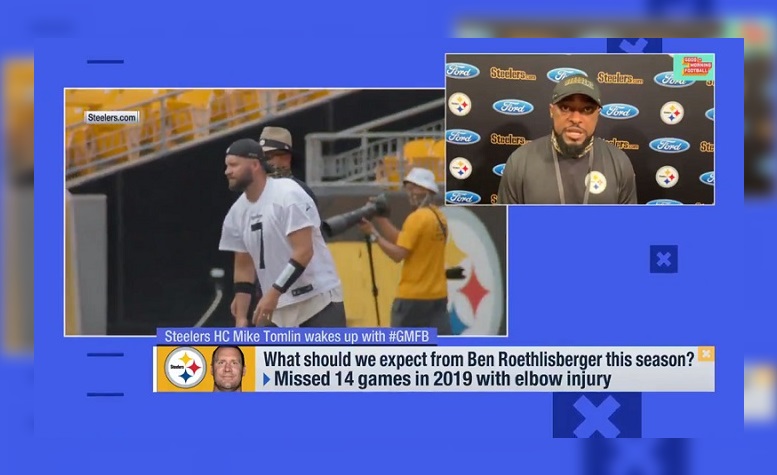 The Pittsburgh Steelers are winding down their first full week of 2020 training camp practices and in those, quarterback Ben Roethlisberger has reportedly thrown quite a bit. Thursday morning, Steelers head coach Mike Tomlin was a guest on Good Morning Football on the NFL Network and midway through his interview he was asked to give an update on how Roethlisberger has looked so far during training camp and what it is he expects out of the veteran quarterback this season.

“You know, just in terms of mentality and intent, I have no question about what we’re going to get from Ben,” Tomlin said Thursday morning. “I’m going on 14 years working with this guy. I’ve been in a lot of competitive situations, I’ve watched him stare adversity and challenges in the face over that time, it brings out the best in him always. In terms of physically and how he’s rebounding from there, I think that it’s a process that he’s going through and we’re proceeding. Obviously leaning on the expertise of the medical people and how he feels. And so far, so good.

“I’ve watched him throw a couple of times this week and, you know, he appears to have Ben-like velocity. You know, I’m still looking for that extremely tight spiral that I’m used to seeing and so there’s still some ground to cover, but we still have some time. I’m excited about him doing what he does – stepping out of the phone booth, if you will, with the cape on and being the guy that he has been for us and facing the challenges that this season is going to present.”

With this first full week of training camp practices coming to a close, we can probably expect Roethlisberger to be given a day off from throwing as it’s already know that the quarterback is on a pitch count of sorts and will only likely be asked to throw just a few days in a row in between rest.

As Tomlin said Thursday morning when it comes to updating Roethlisberger, so far, so good.