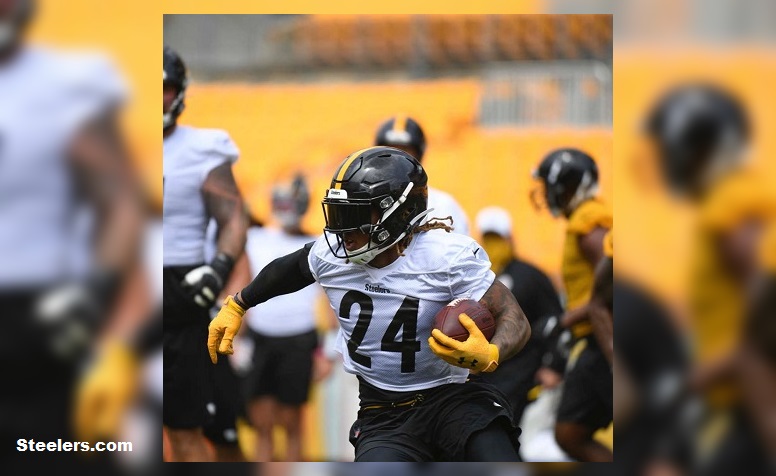 If you’ve paid close attention to the videos and pictures posted by the Pittsburgh Steelers on the team website since the start of this year’s training camp, you’ve probably noticed body transformations in a few of the second-year players and especially when it comes to running back Benny Snell Jr. and wide receiver Diontae Johnson. While the body transformations of those two players isn’t necessarily breaking news based on recent history of second-year Steelers players, the topic has still managed to become a large talking point these last few weeks.

On Thursday, Steelers head coach Mike Tomlin was asked during his media session if these young player transformations between their first and second seasons such as the one Snell has seemingly undergone this year is the result of something as simple as something just clicking in the head of the player that helps facilitate a change.

“You know, I think not only running backs and it’s a legitimate discussion, but I think it happens across all positions,” Tomlin said on Thursday. “I think that continual discussion that we have about the difference between year one and year two, you’re speculating in year one – you know in year two, in terms of what’s required of you not only short term, but just the overall journey itself, the level of conditioning required.”

Tomlin then proceeded to use third-year wide receiver James Washington as an example when it comes to players at his position.

“You know, we’ve talked quite a bit a year ago about the transformation of James Washington’s body with that knowledge and understanding, for example,” Tomlin said. “I believe that you guys will see a significant physical difference in Diontae Johnson, since we’re talking about receivers along those lines this year.”

Tomlin also made sure to point out that body transformations in younger players is not just limited to running backs and wide receivers.

“I think you could look at any position and see growth and development in terms of understanding between year one and year two and appropriate actions taken because of it,” Tomlin said on Thursday. “Whether it’s guys adding bulk and strength for the long-term fight or whether it’s guys getting lean and finding professional tendencies, the professional rhythms in terms of diet and nutrition. There’s a lot of reasons why those bodies transformed, but it has a lot to do with knowledge as opposed to speculating.”

There you go and nobody spells those kinds of things out the way Tomlin can.

It’s probably important to keep in mind that most young players spend a lot of time focusing on getting ready for the annual scouting combine and pro days ahead of their rookie seasons getting underway. Additionally, while most young players are probably told ahead of time about the rigors of an NFL season and the kind of bodies they should have to help navigate it, a lot of them probably just have to find out firsthand during their rookie seasons.

Most recently and most noticeably, we have seen the Steelers young skill position players go through body transformations between their first and second seasons. It pretty much started with running back Le’Veon Bell back in 2014 when he dropped a lot of weight between his rookie and second season. Since Bell, we’ve also seen noticeable body transformations take place in two other running backs, James Conner and Jaylen Samuels as well as with the aforementioned Washington last year.

The Steelers are certainly expecting a huge second year jump from Johnson, who led all rookie wide receivers in receptions in 2019. While he isn’t likely to be as big of a part of the offense as Johnson will be in 2020, it certainly sounds like expectations are high for the second-year Snell as well. If Snell ultimately winds up doing well with whatever offensive opportunities that he gets in 2020, he very well might end being the Steelers feature back a year from now. In the meantime, we’ll wait and see how Snell’s offseason body transformation helps him in his second NFL season.