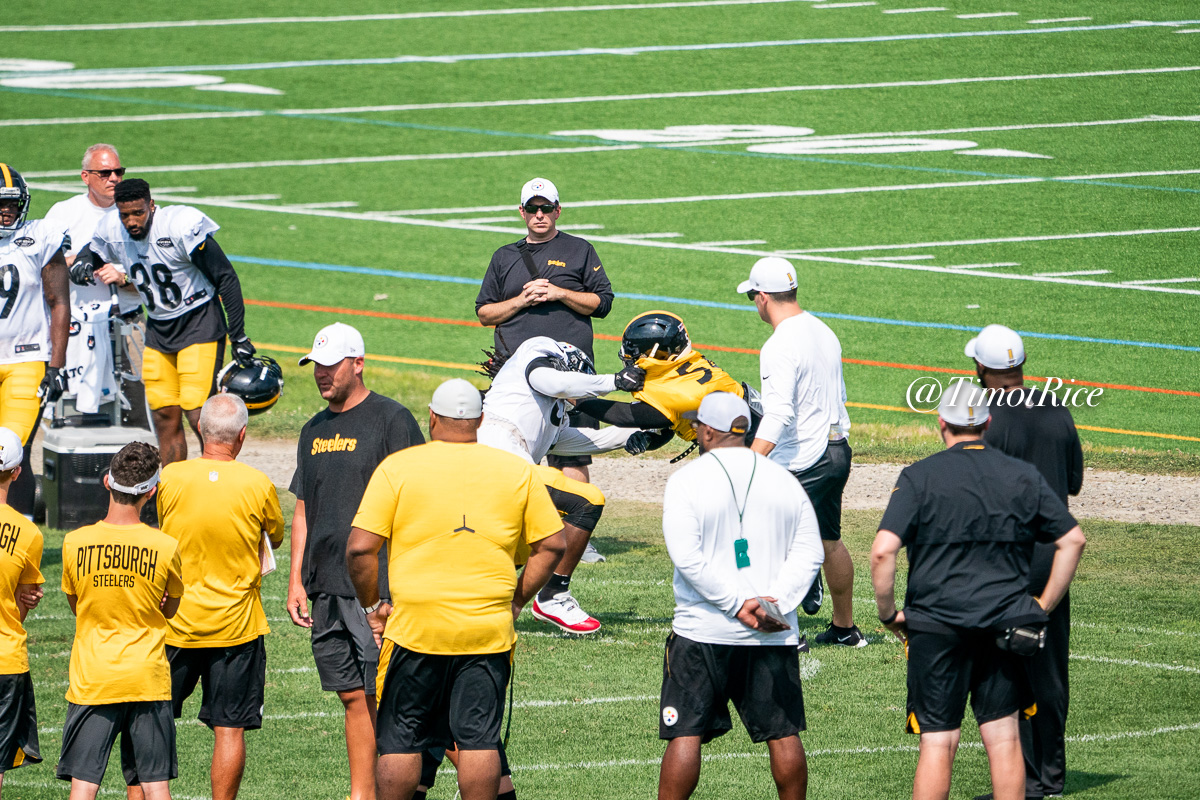 Have a plan but be light on your feet. That’s a classic Mike Tomlin-ism. It applies to conducting this year’s training camp too. The Pittsburgh Steelers begin the padded portion of training camp on Monday, kicking off a 14 day slate of ditching shells for full uniforms. Asked how Monday’s session will look, Tomlin said the goal is to make it similar to training camp at Latrobe. Though like everything else done during COVID, things can quickly change.

“That is our intent, but we are also willing to adjust based on what it is that we see,” he told reporters during a Thursday Zoom call. “From a staffing standpoint, we are very thoughtful about our long-term planning or not doing so. Getting familiar with the level of conditioning that these guys are coming to us in and getting a feel for their ability to take in and retain information that was delivered to them remotely are two of the key variables that determine the pace at which we move. Those are our intentions.”

At Latrobe, the team wasted no time ramping up the intensity once the pads came on. The first days always involved a full-contact, run session along with the fan-favorite backs-on-backers. Tomlin seems to indicate that remains the plan to kick off next week but cautioned things may change based on their initial evaluations.

“We are willing to adjust based on what transpires between now and then. And that is really our mentality about this next month or so. We realize there are certain boxes that need to be checked between now and when we step into a stadium, but we also realize that we might have to alter the pace of some of those intended plans based on the readiness, or lack thereof, of the group. We are just acknowledging that and openly being willing to be flexible when appropriate.”

2020 presents a different kind of on-ramp to begin the season. As Tomlin touched on, player conditioning, level of readiness from a mental/playbook standpoint, and the realities of having a smaller, 80 man roster could all tweak the team’s plans. Pittsburgh has prided itself on having some of the most intense and physical practices in the league. They’ll have to strike the right balance between not overdoing it while recognizing there aren’t any preseason games around the corner. All the evaluation, all the teaching will be done on the practice field. If you don’t tackle now, you won’t do it until the regular season opener versus the Giants.

Another logistical challenge is the environment. At Latrobe, the team had access to four adjacent fields. To begin practice, the defense would warm up on the far field, the offense on the near field next to the bleachers. Special teams could mill around on vacant fields during practice, getting loose, and the team broke off later in practice. 7v7 drills would happen in one location, OL/DL work in another. Even something as simple as having a place for injured players to begin working their way back, walking or jogging around a field, won’t be easily available at Heinz Field.

Now, 80 players are in one space (which doesn’t help with the social distancing of things, either). That’s not brand new to this team, they’ve held camp practices in Pittsburgh the last few seasons, but never for the entire length of camp. Unfortunately, we won’t get the in-depth look at this training camp but from select media reports, should get an idea of how different this summer is compared to others.