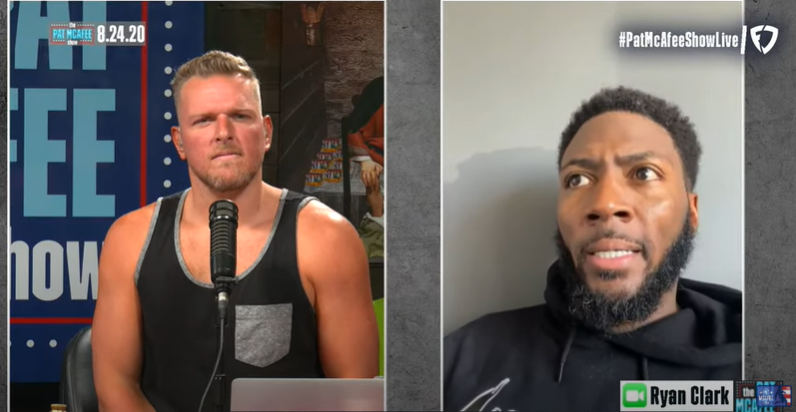 Ben Roethlisberger’s off field persona and leadership have been frequent topics of debate throughout his career. Fans, members of the media and teammates have all had their say about the quarterback’s leadership ability with many various opinions. One former teammate who has not been shy to share their opinion is former Pittsburgh Steelers safety Ryan Clark.

Clark has never been one who is afraid to speak his mind. The now retired safety prides himself on speaking honestly and there have been times in the past where he has mentioned Roethlisberger as not being a natural leader. Clark stopped by The Pat McAfee Show on Monday and Roethlisberger was brought up after the recent comments made by former New York Jets’ general manager Mike Tannebaum. The former Steelers’ safety then tore back the curtain on Roethlisberger’s growth as he shared a great story about the quarterback’s relationship with his son.

“I would bring my son to every walk through on Saturday and so my son became team babysitter, he broke us down for the Super Bowl, him and Ben got really close. When Ben was suspended for four games, we had a walkthrough and my son had a football game, Ben goes to watch him play ball. You gotta know what it’s like to be the Pittsburgh Steelers quarterback at a frickin’ little league football game,” Clark said.

Clark continues to chronicle the relationship between Roethlisberger and his son Jordan, leading up to an incident where the Steelers quarterback reached out to Clark’s son after he was the victim of a racist encounter.

“So, in the offseason, my son had an encounter at a Whataburger, a racist encounter and I get a text. I get a text from Ben and it’s like ‘RC, man’ and it had a little bit of Ben to it. You know, like ‘Hey man, it’s not about any perceived slight you’ve thrown towards me in TV’, he had to get that out. But then he asked about my son and he sent me a paragraph, he’s like ‘You don’t have to if you don’t want to but I would love for you to send this to Jordan,” Clark continues. “I send it to Jordan and Jordan is like ‘Well pop, do you think I can call him’? I can text him and tell him thank you. I said ‘Ben, I’m thanking you as a father but Jordan also wants to reach out to you’ and Jordan did.”

With the narrative focusing on Roethlisberger’s lack of leadership growing over the last number of years, stories that portray him in a positive light have taken a backseat but Clark, honest as always, spoke volumes about the quarterback’s character.

“That’s a story about Ben that people won’t expect. That’s a story about Ben that I think, people necessarily don’t care to hear but that’s growth. That’s compassion, that’s caring about over people and that’s leadership,” Clark continued. “Even though he may have felt some of my commentary on him, though like I told him, I only try to be honest, has been unfair. It didn’t matter as much in that moment as reaching out to a kid that he had a great relationship with.”

Clark’s story may have been about his former quarterback but the value of it goes beyond that. Truly, one of the most wholesome stories that steps outside the boundaries of the game. Give it a watch for yourselves below.

I often give opinions about Ben’s leadership while I was a Steeler and a lot of people attack him for who is off the field at times, but Ben I needed to be fair. @_BigBen7 has always been 💯 with my son @Jclark21_ https://t.co/te2d76pGE8