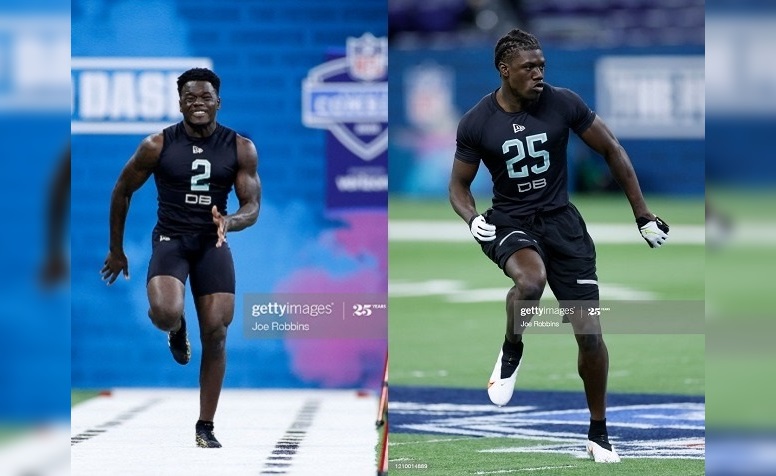 As of a few days ago, the Pittsburgh Steelers are now down to just four rookies on their 80-man roster that were originally signed as undrafted free agents back in late April. Those four players are cornerbacks James Pierre and Trajan Bandy, defensive end Calvin Taylor and punter Corliss Waitman. So, with less than one week remaining until the Steelers must trim their active roster down to 53 players, there’s a good chance at least three of those four players will wind up sticking in some capacity come the start of the regular season.

Of the four rookie undrafted players noted above, Pierre seems to have the best shot at maybe sticking on the Steelers 53-man roster as his name has shown up quite a bit and in positive ways in the post training camp practice pool reports. A Florida Atlantic product and a Deerfield Beach High School alum, Pierre declared for the 2020 NFL Draft back in early January. He finished his college career with 120 total tackles, 18 pass breakups, 8.5 tackles for losses and 3 interceptions in 39 games played in. In his 2019 junior season, Pierre recorded 44 tackles to go along with career-highs of 4.5 tackles for losses and 3 interceptions.

While invited to participate in this year’s scouting combine, Pierre really didn’t stick out much while in Indianapolis, IN as the young cornerback measured in at 6000, 183-pounds and ran his 40-yard dash in 4.59-seconds. Pierre’s vertical jump of 33.5-inches and board jump of 10’3″ also failed to draw much attention to the cornerback. Even so, the Steelers were ultimately still attracted to Pierre as evidenced by them signing him right after the draft concluded.

Should Pierre ultimately stick on the Steelers 53-man roster past next Saturday, him doing would likely come at the expense of second-year cornerback Justin Layne. While Layne hasn’t been mentioned often as making many plays throughout training camp, it’s hard to say for sure if he’s having a good, average or bad last several weeks, all things considered, due mainly to none of us being able to observe the Heinz Field practices.

On the heels of the Steelers waiving young cornerback Alexander Myres on Sunday, odds are now very good that, at worst, Pierre will ultimately land on the team’s 16-man practice squad as one of maybe two cornerbacks. The other cornerback that might join Pierre on the Steelers practice squad at the start of the regular season is the aforementioned Bandy, a Miami product.

Bandy lasting this long on the Steelers summer roster is a far less surprise than Pierre doing so. While entering the NFL very undersized at 5076, 180-pounds, according to his scouting combine measurements, Bandy, who also declared for the 2020 NFL Draft as an underclassman, showed to be a real physical player during his college career. As a three-year player and two-year starter for Miami, starting 29 games in total, including three during his freshman season, Bandy registered 90 total tackles, 3 sacks, 4 interceptions and a forced fumble during his college career. 9 of those tackles resulted in lost yardage and he was also credited with 22 total pass breakups.

While Bandy played both outside and in the slot at Miami, he’s likely best suited to be a nickel cornerback at the NFL level. And quite honestly, Bandy’s college tape reminds you a lot of another current Steelers cornerback, Mike Hilton, who is also a former undrafted free agent unearthed by the team several years ago.