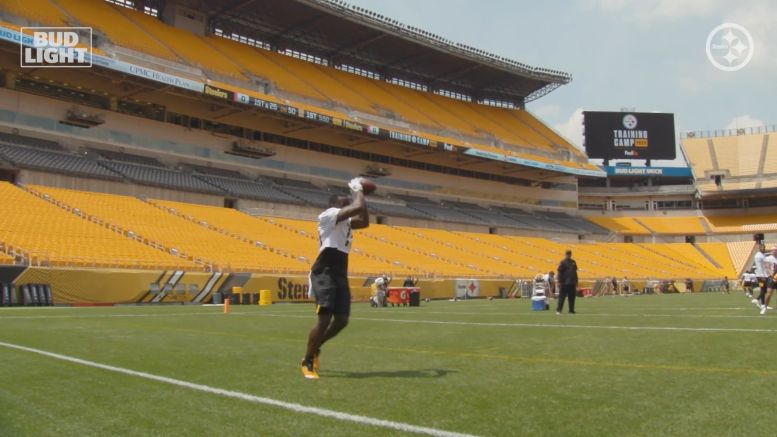 After leading the Pittsburgh Steelers in receiving yardage last season, third-year wide receiver James Washington almost seems to be a forgotten player so far during training camp and especially with their being so much buzz surrounding rookie wide receiver Chase Claypool, the team’s first draft pick this year. On Thursday, however, Steelers quarterback Ben Roethlisberger was asked to comment on the progression he’s seen from Washington after sitting back and watching him play last season.

“Yeah, I think James has done amazing things,” Roethlisberger said of Washington. “I think to me, the biggest thing that I’ve seen is his growth and the understanding of the offense and his conditioning. His conditioning is like no one I’ve ever seen before.”

While that praise is nowhere near the kind of praise that Roethlisberger had for Claypool on Thursday, it’s praise just the same. Washington, as he’s already indicated since training camp got underway this summer, feels lighter and leaner heading into his third season.

“I feel a lot lighter out there running around,” Washington said last week during his media session “I feel a little more explosive coming off the ball. Just being able to jump is night and day different, it feels like. And I just feel like all-around new person. When you shed some weight like that and kind of lean down just a little bit more, so, it’s all paying off.”

While Washington finished the 2019 season ranked third on the team in total receptions with 44, his 735 receiving yards was tops on the team and ranked him 48th overall league wide. Additionally, of the NFL players who had 40 or more receptions last season, Washington’s yards per reception average of 16.7 was seventh best. That’s not bad at all considering the quarterbacks that Washington had throwing to him last season.

During his college career at Oklahoma State, Washington proved to be a huge deep passing threat and subsequently a big play producer. He also proved to be a reliable combative catcher in college as well. After a slow start to his 2018 rookie season, Washington ultimately closed that year out with a few nice catches down the field from Roethlisberger.

With Roethlisberger now healthy after missing most of the 2019 season and Washington another year experienced, the hope is that the two will connect at an even higher rate down the field in 2020. It’s imperative that Washington hits the ground running with his offensive production in 2020 and especially with him expected to be the team’s top Z wide receiver in 11 personnel groupings right out of the chute. If he doesn’t, he runs the risk of his playing time being ate into by Claypool. Regardless, Washington made it clear last week that he’s taking his third NFL season in stride.

“It is year three, but I’d never want to add extra pressure to myself,” Washington said. “All I can do is just go out and try to get better each and every day with the offense and get on the same page with 7 [Roethlisberger] and earn his trust and the rest will take care of itself.”