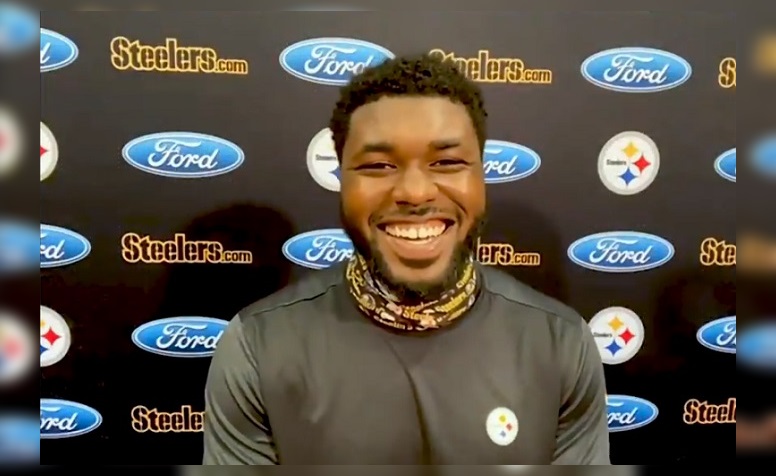 While none of us from this site attended Heinz Field on Tuesday to observe the Pittsburgh Steelers go through their second padded practice of 2020, several leaks from session indicate that second-year inside linebacker Ulysees Gilbert III made a few plays. After Tuesday’s practice ended, Steelers head coach Mike Tomlin was asked about Gilbert’s positive practice showing and asked to comment on his maturation at this stage of the offseason.

“You know, I don’t know the answer to that,” Tomlin said. “I wouldn’t necessarily characterize him as a second-year player because he missed so much time in year one. Hopefully, because he’s been a part of the program and been in the building, there’s some residual benefits from it. But in terms of play or exposure to play, he hasn’t experienced as nearly as much as some of the others in his class because of injury.”

Gilbert, who was selected by the Steelers in the sixth-round of the NFL Draft out of Akron, had his rookie season cut short halfway through it because of a back injury. While Gilbert failed to play any defensive snaps in the seven games that he dressed for as a rookie, he did log 150 total special teams snaps and registered 5 total tackles on those units prior to being sidelined.

After Tomlin made his remarks about Gilbert Tuesday afternoon, the young linebacker was informed about them during his own Zoom session with the media. He was then asked how much he was able to grasp during his rookie season even though you couldn’t be on the field as much as he would’ve liked to have been.

“I grasped a lot because I had a lot of good veteran guys in front that helped me along the way,” Gilbert said. “Guys like Mark Barron, Tyler Matakevich, even some of the other guys in the linebacker room like Vinnie Williams. Both sides and special teams I got a lot of knowledge and was able to play in a couple of games and got some great game opportunities in the ways of being a rookie, as well as just learning behind guys like Vince Williams and Mark Barron.

“I was just watching how those guys play, knowing they’re veterans, just listening to everything they say in the meeting rooms as well as on the field. And just kind of watching how they play to see other things I could improve on my game and as well as the things that I do have in my game to just get better at and keep them at a high level.”

While Gilbert mentioned learning during his rookie season from inside linebackers Mark Barron and Tyler Matakevich, both of those players are no longer on the team. Additionally, the Steelers didn’t address the inside linebacker position during free agency or the draft, a likely sign that the organization has confidence in Gilbert being a primary backup behind starters Devin Bush and Vince Williams in 2020. Gilbert was asked if took the Steelers inactivity at the linebacker position during the offseason as a sign that the organization has confidence in him moving forward.

“I mean, I really didn’t know what to think,” Gilbert said. “They made a decision of themselves, but I just look at it as just opportunity in front of me and just whatever they want me to do, I’ll put my right foot forward and just do whatever they want me to do. At the end of the day, I’m just taking it day by day, thankful for every opportunity that I do get, and I’ll just be ready whenever they call my name. So, at the end of day it’s kind of like on them, but at the end of day I’m just going to continue to work.”

One play that Gilbert did make during Tuesdays practice included him essentially taking the football away from running back Kerrith Whyte Jr. on a pass play. Gilbert was asked to comment about that play during his talk with the media and he obliged.

“Just being patient and just watching his hands and having late hands with myself and then trying to break up the ball,” Gilbert said about his Tuesday turnover. “And at the end of the day, he [Whyte] like bobbled it a little bit and I was lucky enough to get my hands on it and just bring it in. It was just a pretty good play and it’s just something that my coach tried to teach us just with late hands and being patient.”

At worst, Gilbert figures to be a core special teams player for the Steelers in 2020 along with fellow inside linebacker Robert Spillane. It’s too early to tell if Gilbert will be the primary backup at both inside linebacker positions come the start of the 2020 regular season but that’s obviously the role he’s gunning for these final four weeks of the offseason.