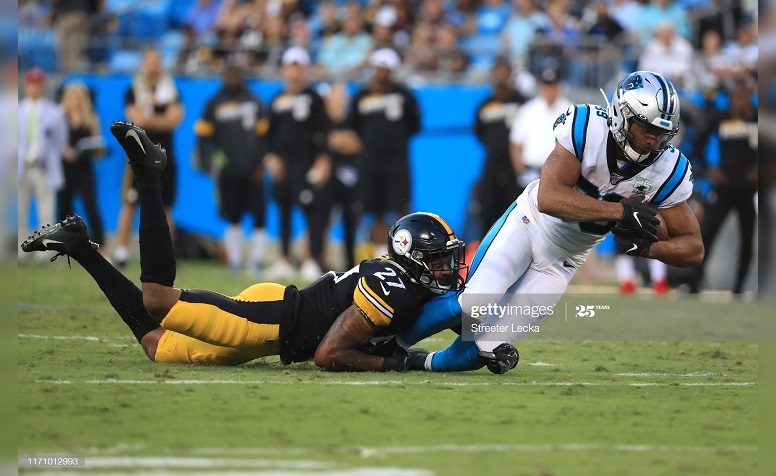 “And bringing Marcus into my room, really pumped up the room. It got all the other guys excited. I think it got the defense as a whole excited because now you get to see a guy and say, ‘Wow, that guy really can do some stuff.’ And so, there’s things inherently wrong, but the hardest thing about football is running into people and Marcus has no problem doing that, so I have no problem coaching him.”

So, what is it about Allen’s energy and personality that resulted in him energizing the Steelers inside linebacker room?

“I don’t know what his personality is, but he’s a high energy football playing son of a gun, some people would say,” Olsavsky said on Monday of Allen. “And that’s what you like. I think that’s probably why we drafted him. He played safety in college and things like that and I remember when I got into the league they said it takes a couple of years for some players to develop and that’s hopefully what we’re seeing right now.”

To date, Allen, a Penn State product, hasn’t played much since he was drafted. After spending all his 2018 rookie season on the Steelers 53-man roster, Allen spent most of his second season on the team’s practice squad. Even so, it appears as though he’s quietly gone about his business in a professional manner this offseason and while he is seemingly spending a lot of time now in the inside linebacker room, he’s still likely to make the 53-man roster again come Saturday as a backup and possible core special teamer.

“We’re going to see Marcus in his third year really develop into a real professional,” Olsavsky said of Allen on Monday. “I talked about Vince [Williams] earlier as being professional. Devin [Bush], as young as he is, does some very professional things on the field and that’s why he makes plays like that.”

So, is Allen officially an inside linebacker now? It’s hard to say for sure but it’s evident based on what Olsavsky said on Monday that the former fifth-round draft pick is now a lot more position flexible than he was when he entered the NFL a few springs ago.

“So, Marcus, you know, it’s a new role, but he’s done a great job,” Olsavsky said of Allen. “He knows what he’s supposed to do if he was playing safety and he knows what the linebackers are doing based on that knowledge.”