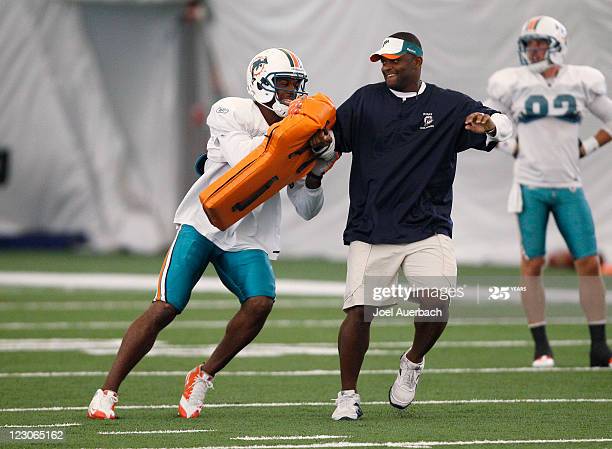 Even if it’s subconscious, there’s no question a former NFL player teaching current ones is a plus in the locker room. That’s what new WRs coach Ike Hilliard brings to the table, breaking from what the Steelers have had in recent seasons.

The 7th overall pick of the 1997 draft, Hilliard spent 12 years in the NFL. His first eight came with the Giants, the final four with Tampa Bay, including the 2005 season, Mike Tomlin’s final year as the Bucs’ DB coach. Over his career, he caught 546 passes for nearly 6400 yards and 35 touchdowns.

Now 44 years old, Hilliard brings that experience as a player and coach to the Steelers’ locker room. He believes it’ll be an asset to the young group he’s working with.

“To some degree, being fortunate enough to play 12 years would help me [get hired] in terms of how I communicate, what I communicate, how I can detail what I need to detail for each player or collectively for the group in terms of the nuances of the position,” he told reporters via the team website yesterday.

Having NFL experience isn’t a locker room mandate. The team’s two previous WRs coaches, Richard Mann and Darryl Drake, both well-respected had limited or zero professional experience. But having someone who can say, been-there-done-that, makes an impact in the locker room. Part of what made former OL coach Mike Munchak so successful was his Hall of Fame resume. Players understood Munchak knew what it took to be successful. He had the gold jacket to prove it.

However, being an effective player and being an effective coach require different skills. Some incredibly talented players weren’t successful coaches, unable to translate their innate athletic ability into something teachable for an entire group. Hilliard recognizes that challenge.

“For me, I would have to go back to my first job interview. The late Tony Sparano told me playing years are like dog years to coaches. It’s a little bit different in terms of communicating with players, how you deal with players, how players deal with you.”

Pittsburgh may have a young receiver room, only Amara Darboh is older than 25, but don’t mistake it for an inexperienced group. JuJu Smith-Schuster is going into his fourth season, James Washington his third, and Diontae Johnson had to grow up quickly last season after Donte Moncrief imploded.

Hilliard also brings coaching experience to the room. His first job came as the UFL Florida Tusker’s WR coach in 2009 and 2010 before breaking into the NFL with Miami in 2011. Since then, he’s been the WRs coach for Washington and Buffalo.

“Hopefully [my experience] helps. I’ve been unbelievably blessed to this point to be still be around the game. And look forward to continuing to lean on that experience as I continue to teach.”