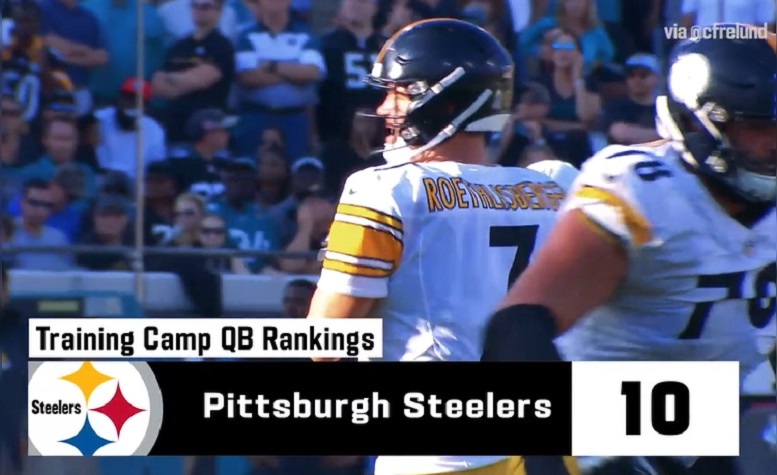 Most major media NFL analysts probably don’t have a high opinion of the Pittsburgh Steelers quarterback depth chart entering training camp this year after watching Mason Rudolph and Devlin Hodges play last season and with veteran Ben Roethlisberger returning from a 2019 serious elbow injury. As a whole, I bet most major media NFL analysts would rank the Steelers quarterback depth chart in the bottom third of the league. Cynthia Frelund, the NFL analytics expert at the NFL Network, however, thinks much higher of the Steelers current quarterback situation entering training camp.

Frelund was recently asked to rank each team at the quarterback position heading into training camp and she has the Steelers at No. 10. No explanation was given by Frelund for the Steelers being ranked 10th overall so we can only speculate that it has a lot to do with her confidence in Roethlisberger being able to rebound from his 2019 injury.

As for the rest of the Steelers quarterback depth chart entering the team’s 2020 training camp, it does include the quarterbacks that have all started at least four games in the NFL. Surprisingly, Paxton Lynch, a former first-round draft pick, has the fewest career starts of him Mason Rudolph and Paxton Lynch. You would be hard pressed to find another NFL team this year with four quarterbacks under contract that have a minimum of four NFL starts.

While Frelund has the Steelers quarterback room ranked 10th overall on the NFL entering training camp, Adam Schein, who CBS Sports proclaims to be one of their top NFL analysts, has a much different opinion of that positional group in Pittsburgh.

“He’s [Roethlisberger’s] a Hall of Famer but he’s getting long in the tooth,” Schein said on Tuesday. “And my problem with the Steelers, listen, they didn’t give him a real backup. You know, I think the Steelers backup quarterback situation is alarming. I mean Duck [Devlin Hodges] is dreadful and Mason Rudolph, and I loved that draft pick when they made it a couple of drafts ago, dreadful. And the fact that they eschewed the backup quarterback position was just a terrible job by Kevin Colbert this offseason.”

.@AdamSchein couldn't be happier to see Ben Roethlisberger in shape and ready to roll for the 2020 season…

BUT! He still has questions regarding the Steelers roster after failing to address the backup QB and RB positions.#SteelerNation | #NFL | #T2S pic.twitter.com/KnlVfFudZD

The only way the Steelers quarterback depth will get tested in 2020 is if Roethlisberger goes down injured again. And if that ultimately happens, we’ll find out for sure if Colbert’s decision to not sign a veteran quarterback this offseason in lieu of sticking with Rudolph as Roethlisberger’s backup was the right decision.

In case you’re curious, below are the nine teams that Frelund has ranked higher than the Steelers when it comes to the quarterback position entering training camps.