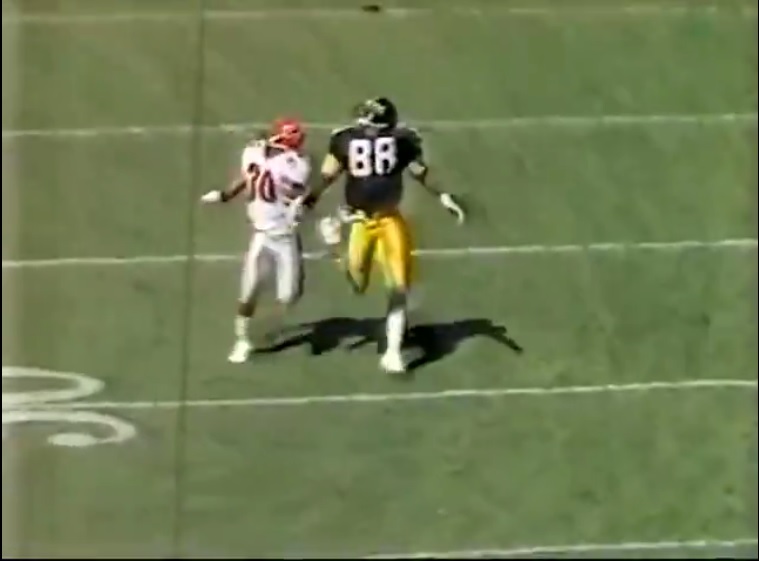 Since the 1970 merger, there’s been 17 Steelers to go for 150+ receiving yards in a game. Most on the list are household fans the casual fan would recognize. Antonio Brown, Lynn Swann, Hines Ward, you get the idea.

Then there’s Joey Clinkscales. It was 1987 and his time to shine.

Perhaps I’m stretching the limits of “next man up” here. Clinkscales was part of the 1987 replacement players as most stars and many starters were on strike. In that sense, essentially everyone he took the field with was “next man up.” Or in some cases,”next man off the street.”

Clinkscales was part of the team to begin the year, a 9th round selection of the ’87 draft, but initially cut after following a leg injury in the first preseason game. Once the lockout began, teams were forced to cobble together whatever rosters they could. QB Steve Bono was making his first career start. WR Russell Hairston was named Arena League MVP just months prior. And kicker David Trout played with the team in 1981, rejoining them six years later, presumably because he was lived in Western PA and was local. Teams had only ten days to prepare for Week 4, the first strike game.

That game, Steelers travelling to Atlanta, was Clinkscales best. He finished the day catching six passes for 150 yards and one touchdown. Bono found him for a 57 yard gain down the left sideline in the first half, setting up a Russell Hairston (who was playing his first and last NFL game) touchdown.

Clinkscales found the end zone himself late in the second half to salt the game away. Backup QB Reggie Collier entered the game, completing this fade in the left corner of the end zone.

Pittsburgh would go on to beat Atlanta, 28-12, their first of two wins over the three-week strike. Chuck Noll would offer brief but high praise after the game.

“I can’t say enough about Joey Clinkscales. He did a great job.”

It wouldn’t be Clinkscales last NFL game but it’d be by far his best. He caught just seven passes the rest of the season, failing to find the end zone,

Waived the following October, he would grab cups of coffee with Tampa Bay, Cleveland, and Indianapolis, but never play in another game. Moving on with life’s work, he circle back to Pittsburgh as a scout before moving into prominent front office roles with the Jets and Raiders. Bill Parcells even interviewed him to be the Dolphins’ GM though didn’t ultimately hire him.

Most recently, he served as the director of player personnel for the XFL’s Los Angeles Wildcats before the league folded.