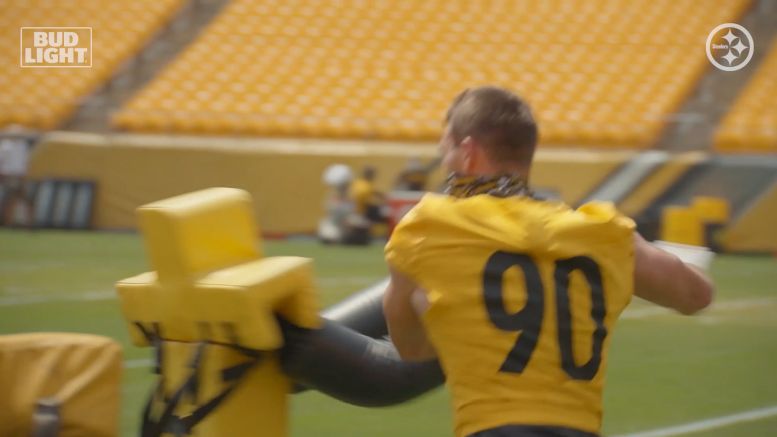 By this point in time, it seems readily apparent that the Pittsburgh Steelers’ plan is to move into the 2020 season with a new starting right tackle, barring disaster. While Stefen Wisniewski has had the opportunity to get some first-team reps with either David DeCastro or Maurkice Pouncey sitting out, Matt Feiler is entrenched at the left guard position, leaving Chukwuma Okorafor and Zach Banner to duke it out on the right side of the line.

While Okorafor is currently dinged with a shoulder injury that is hopefully not significant, the team has already previously stated that they are prepared for this competition to go down to the wire—in other words, just before the regular season starts. And they probably won’t hesitate to make a change in-season if necessary.

Without the benefit of a proper offseason, and with no preseason games, it can be quite difficult to get a true feel for how one will play in a game-like setting. But Tomlin does see one advantage that he has in his pocket to help him evaluate his young tackles: a Mr. Trent Jordan Watt.

Watt, of course, is the Steelers’ first-team All-Pro left outside linebacker, who finished the 2019 season with 14.5 sacks and eight forced fumbles in addition to two interceptions, also recovering four fumbles for a total of six takeaways produced. He finished third in voting for the Defensive Player of the Year Award.

“What a great opportunity for those young right tackles vying for that spot”, Tomlin said about their going up against the former first-rounder. “There’s no guesswork in terms of where they are, in terms of overall global readiness. Watt is one of the very best in the business, and they get an opportunity to sharpen their sword against it every day”.

Truth be told, it’s unlike that the Steelers would have faced a better left edge rusher during the preseason than Watt, so while the in-game scenarios will be missed for these young tackles, in terms of the quality of competition against which they are being judged goes, you can’t ask for much more than what they are already getting.

Perhaps that is one of the prevailing reasons that the team appears to be so comfortable in settling for one of them to be the starter this season after Feiler successfully started 25 games at right tackle over the past two seasons.

They’ve seen Okorafor and Banner against the best. It’s not pretty, but that’s what just about any tackle in the league is going to look like going up against him, as we saw every week throughout the 2019 season, and which we expect to see in 2020 and beyond.