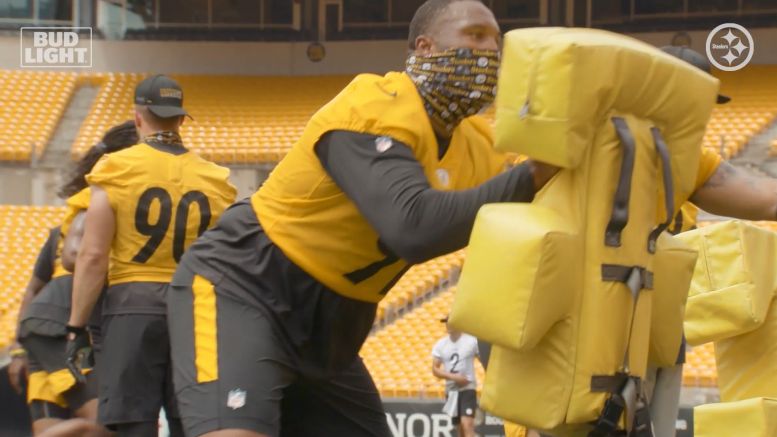 The Pittsburgh Steelers have not one but two players returning from major injuries last season. Quarterback Ben Roethlisberger has obviously been the focal point of attention, but especially with the departure of Javon Hargrave in free agency, the defense has also been very excited to welcome back Stephon Tuitt, who missed the final 10 games of the 2019 season with a torn pectoral muscle.

The seventh-year veteran was off to his best start when he went down early in the sixth game of the season chasing down Philip Rivers in Los Angeles for a potential sack, of which he already had three and a half on the season. He also had six tackles for loss among his 22 tackles. Cameron Heyward went on to be named a first-team All-Pro, but one wonders if Tuitt would have outpaced him had he remained healthy.

The good news is that the Steelers have no concerns about him from a health perspective. “He is not” being limited in any way in that regard, Mike Tomlin said after practice on Tuesday. “He is a guy that has been given full medical clearance, so I have little to no reservations about management of reps for him from that perspective”.

With that said, it’s been some time since Tuitt has been on the football field, going down in October with his pectoral injury, so the team understands it will take some time for him to get fully up to speed and back to where he was prior to his season prematurely ending, and they will be patient with that.

“He’s just getting his legs back on the ground, if you will, being out of football for as long as he’s been”, Tomlin told reporters. “I’m sure he’s excited being out there. He and I had had that discussion yesterday. In terms of some of the detail, execution, some of the fine motor skills associated with play, that’ll be a work in progress”.

Once he is up to full speed, he should make a vicious combination with Heyward, who posted nine sacks of his own last year and 11 tackles for loss. There may not be a better interior defensive line pairing in the NFL, in fact—which makes it all the more imperative that the Steelers work something out with Heyward before he hits free agency next year.

As for Tuitt, he still has three years left on his contract, including this one. Health has been the only thing holding him back in recent years, having also suffered a significant injury on the second play of the 2017 season, his first after signing a lucrative contract extension.