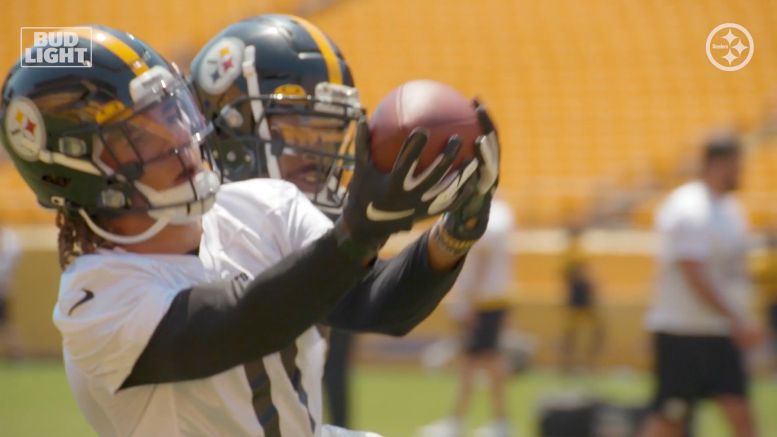 JuJu Smith-Schuster’s position is an interesting one. In spite of the fact that he is only 23 years old, he is entering his fourth season in the NFL and is already the most experienced player on the roster for the Pittsburgh Steelers at his position. Even the two wide receivers that the team drafted in the two years following his selection in 2017 are older than he is.

In fact, the only wide receiver on the roster who is younger than him is Chase Claypool, the 22-year-old whom the Steelers made the 49th-overall pick in the 2020 NFL Draft. The 6’4” rookie out of Notre Dame is the highest the team has drafted a wide receiver since Santonio Holmes in 2006, and it’s on Smith-Schuster to help him get going, a leadership role he is embracing, in spite of the fact that he is still very much learning himself.

“At the end of the day, I want success for everybody. We drafted a young guy, Chase Claypool. I’m super excited to work with him”, he told reporters on Monday before practice about his role within the wide receiver room this season. “His athleticism is amazing”.

Smith-Schuster has 211 receptions for 2895 yards and 17 touchdowns in his career. The rest of the receiving corps in the entire roster doesn’t even match that combined. In fact, if you add up all of the career receiving yards of the rest of the wide receivers, it only comes to 2364, and that includes Deon Cain and Amara Darboh.

I can’t recall the last time a wide receiver has been in such a position for the Steelers. The Young Money Crew had Hines Ward, and when he retired, they replaced that leadership role with Jerricho Cotchery. After him, it was Darrius Heyward-Bey, and by the time he was gone, so was everybody else. Last year, the ‘veterans’ were Donte Moncrief and Johnny Holton.

Even they’re gone now. This is solely and squarely Smith-Schuster’s unit. Richard Mann isn’t walking through the door. Neither is Darryl Drake. Ike Hilliard is the new position coach for the group, but nobody has a greater stake in the success or failure of the unit than its leader, and that’s the man they call JuJu.