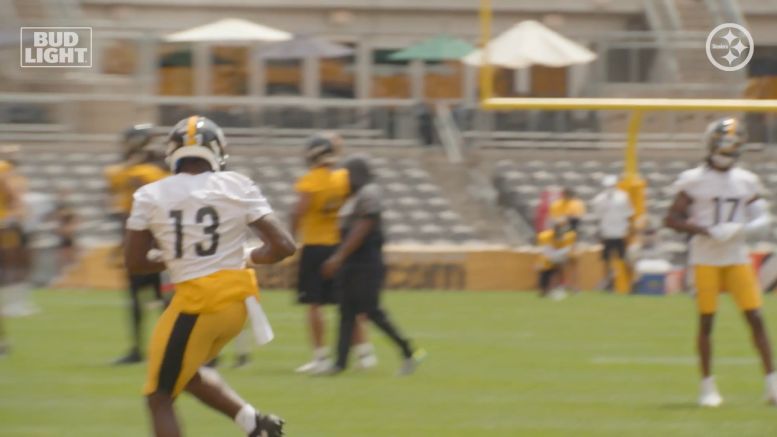 Diontae Johnson has rightfully attracted a lot of attention this offseason following his encouraging rookie year for the Pittsburgh Steelers, during which he accumulated 680 receiving yards and five touchdowns on 59 receptions while playing with the likes of Mason Rudolph and Devlin Hodges under center, across his 652 offensive snaps.

While he had some people in his corner as a sleeper when he came out of Toledo last year, there is a growing groundswell of belief that he has the makings of a future star, which is good timing considering we may well be looking at JuJu Smith-Schuster’s final season in town.

But for as much attention as he deserves, we shouldn’t be overlooking James Washington, who led the team in receiving yards a year ago and was their most consistent contributor over the second half of the season—at least before struggling late. The 2018 second-round pick is heading into his third season more confident than ever, which did take some work.

Even though he played pretty extensively as a rookie, he had a hard time adjusting to the game at the NFL level and in establishing a connection with Ben Roethlisberger. With an extra year of experience under his belt and some very tangible success, however, he’s not worried about where he fits in—just about getting better.

And he had very specific ideas about the areas of his game in which he wanted to improve, as he told reporters prior to a recent training camp practice. “First off, I would just say my stance and start”, he named as his primary target. “Coming off the ball quicker, getting into the route quicker, being available for the quarterback early on in your route if you need to. And then just sharpening up skills and the playbook. And just studying that and making sure that I know what I’m doing at all times at every position”.

Cleaning up his routes may be the best thing that Washington can do for himself. It was definitely a significant issue during his rookie season, rounding corners and things like that, taking too long to turn back to the ball to make himself open.

The more you make yourself available to your quarterback, the more you’re going to get the ball, and Washington wants the ball. He may not ever be a volume guy who’s going to get 100 catches a year—that’s pretty rare for downfield threats—but he doesn’t want to limit himself in where he can contribute and be effective.

From what little I can glean of his personality, though, I don’t think he’s too worried about the fact that he often gets overlooked. Even rookie Chase Claypool has gotten more press this offseason. He’s not on a lot of people’s radar, but where will he stand once the season’s over? That’s up for him and his play to determine.