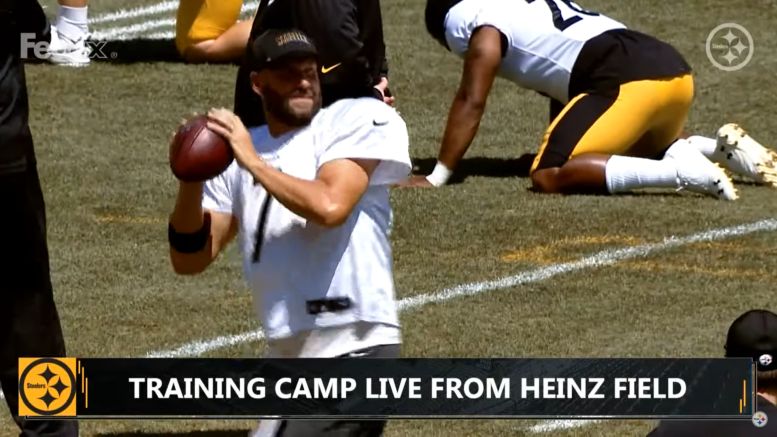 Seemingly the least-talked-about wide receiver on the team—at least among those of a higher profile—third-year James Washington is coming off a season in which he led the Pittsburgh Steelers in receiving yards. Granted, it was a pretty low number to lead a team, but given the circumstances with below-average quarterback play, it’s still a notable feat on his part within context.

And he’s excited to work with Ben Roethlisberger again after gaining important experience last year. The two struggled to get on the same page during Washington’s rookie season in 2018, and they didn’t have much opportunity to build that connection last year due to Roethlisberger’s injury, but both expect to be back this year better than they were before.

“I figured with the surgery he would come back a brand new person and it’s definitely showing”, the wide receiver said of his quarterback yesterday. “He is throwing the ball great and doing everything great. The other day, during the scrimmage, it was nice to see No. 7 back in a game jersey and his pads and stuff. Last year I enjoyed everything, but it was different not having him there. It was good to see him back out there”.

As a rookie, Washington only caught 16 of 38 passes for 217 yards and one touchdown, which came on a busted play early in the season. Though he was only credited with two drops, the substantial incompletion rate did have a lot to do with his not being in sync with Roethlisberger (but also due to the latter’s deep-ball accuracy issues).

Last season, on 80 targets, he caught 44 passes for 735 yards and three touchdowns. His drop rate ticked up from 5.3 percent to 6.3 percent with five total drops, but again, the primary culprit for the reception rate, other than the fact that his average depth of target was about 16 yards down the field, was on the quarterback.

“All I can do is go out and try to get better each and every day with the offense. Get on the same page with No. 7 and earn his trust. The rest will take care of itself”, Washington said about the role that he hopes to play in the offense in 2020.

He will be joined at wide receiver by JuJu Smith-Schuster, a former Pro Bowler, and Diontae Johnson, who has the makings of an emerging start. That is not to mention rookie second-round pick Chase Claypool and some returnees from last season like Ryan Switzer, Deon Cain, and Amara Darboh. And that is just the pass-catchers list at wide receiver.

No matter how long the list gets, Washington wants to be near the top. At the very least, he believes he can be the deep threat the team needs, and which he’ll have a better chance of proving with Roethlisberger back and able to deliver more consistent balls down the field than the combination of Mason Rudolph and Devlin Hodges.