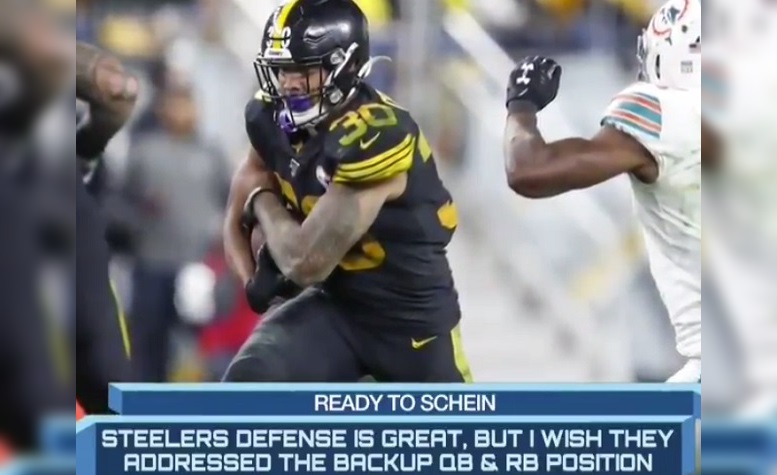 Who is the worst starting running back in the NFL entering the 2020 season? Adam Schein, an NFL analyst for CBS Sports, believes it’s James Conner. Not only that, Schein said Wednesday that the Steelers 2020 running back depth chart is the worst in the league as well.

.@AdamSchein couldn't be happier to see Ben Roethlisberger in shape and ready to roll for the 2020 season…

BUT! He still has questions regarding the Steelers roster after failing to address the backup QB and RB positions.#SteelerNation | #NFL | #T2S pic.twitter.com/KnlVfFudZD

“You could make the case, and I will say it again. James Conner is the worst starting running back in the NFL, Schein said in a video segment. Crazy or accurate? Think about it. In fact, go through all the running back rooms in the league. Factor in Anthony McFarland, who they took in the fourth round out of Maryland. Listen, this is as bad of a running back room as you have in the National Football League.

Really? The worst starting running back in the NFL right now? That’s a bit far-fetched. Sure, Conner has had durability issues since entering the NFL, but even so, he put together a nice 2018 season.

According to Pro Football Focus, Conner’s 60 total broken tackles in 2018 trailed only Saquon Barkley of the New York Giants and that’s with him missing three whole games and parts of a few others with injuries. Last season, Conner registered a seventh-place ranking among running backs in missed tackles forced per touch — forcing 19 missed tackles as a receiver on just 34 receptions. He did so while missing six plus games with injuries.

As for the Steelers having the worst running back depth chart in the NFL right now, that’s probably a bit harsh of a statement as well. While Benny Snell Jr. didn’t get but 111 total touches during his 2019 rookie season, he had some nice moments in a few games just the same. It’s way too early to pass judgment on Snell until we see more and he’s hardly the worst backup in the NFL just the same.

As for Schein’s comments on McFarland, he’s really underselling his potential to be complimentary piece in his rookie season. McFarland, as we saw in his two seasons at Maryland, is an explosive running back both as a ball carrier and as a pass catcher out of the backfield. Sure, he might not hit 100 total touches as a rookie in 2020, but even if doesn’t, I bet he still delivers a few much-needed explosive plays as the season progresses.

We’ll find out in 40 days who the Steelers fourth and final running back is and that’s assuming they keep they many. If they do keep a fourth, it will likely be one of Jaylen Samuels, Wendell Smallwood, or Kerrith Whyte Jr. Two of those three running backs, Samuels and Smallwood, have both already had limited success art the NFL level and both already have well more than 170 total touches in the NFL.

While nobody should argue that the Steelers current running back chart ranks in the top 10 in the NFL, saying the group is 32nd out of 32 is ludicrous, which is a great definition for most of Schein’s analysis from year to year.