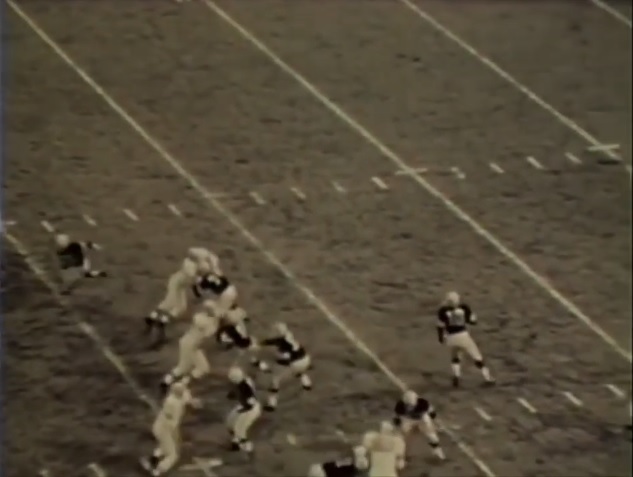 In 1957, the Pittsburgh Steelers QB room consisted of a future two-time All Pro, a 7-time Pro Bowler, and Hall of Famer.

By the end of the decade, the team found a reason to dump all three. The success they had came somewhere else and perfectly encapsulates how depressing the Steelers franchise was until Chuck Noll turned them into a dynasty.

That year, Pittsburgh rostered some of the most well-known quarterbacks of the era: Len Dawson, Jack Kemp, and Earl Morrall. They all saw game action during the season and still, the team bailed on them over the next 36 months. This is the story of how they assembled one hell of a QB room and did absolutely nothing with it…except watch other teams win with them.

Len Dawson was first. Picked 5th overall of the 1957 draft, he was one of three players on the team’s radar. According to the Post-Gazette, the Steelers eyed three names: Paul Hornug, Milt Plum, and Dawson. Hornug went 1st overall to Green Bay and the team chose Dawson over Plum, who went in the 2nd round to the Browns and became an underrated QB in NFL history.

After the pick, Art Rooney said the team was lucky to draft Dawson.

“We were lucky to get a great passer like Dawson,” Rooney told the paper. “Had the Chicago Cardinals won the bonus, they would have taken Hornug and Green Bay would’ve grabbed Dawson. Then we had to flip a coin with Green Bay and Cleveland for third pick. We were lucky again because we beat out the Browns. If we hadn’t, Paul Brown was going to take Dawson. He thinks he was the best passer in the country.”

How did they treat Dawson, the man they were so lucky to get? By almost never playing him. In three seasons with the Steelers, he threw just 17 passes, tossing one touchdown and no interceptions.

True to Rooney’s statement, Paul Brown loved Dawson. With a new head coach in Buddy Parker, Pittsburgh traded him to Cleveland on the final day of 1959. Things didn’t work out there either and it wasn’t until he landed in Kansas City did Dawson begin his Hall of Fame career.

Kemp was next. Detroit quickly discarded him after making him their 17th round pick of the ’57 draft and the Steelers soon scooped him up. But Pittsburgh found little use for him. He appeared in four games as a rookie, going 8/18 for 88 yards, no touchdowns, and two interceptions. He was gone by the start of 1958, not appearing in another game until 1960 with the AFL Chargers before spending the bulk of his career with the Bills.

Morrall was the last QB to enter the fold. Pittsburgh made a big play for him, trading two first round picks to the 49ers on September 16th. Parker, according to the PPG, made a calculated “gamble” in trading for him after Morrall spent his rookie year on the bench in San Francisco behind YA Tittle. 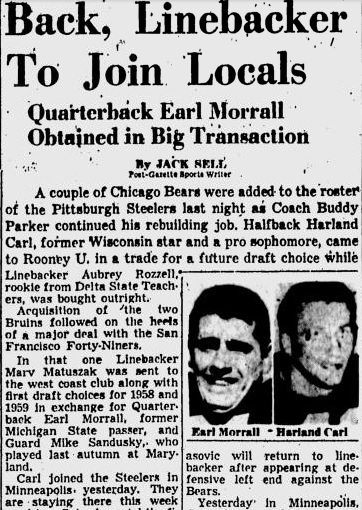 He played by far the most of the three, starting 11 games in 1957 with decent results for the times. He had the lowest INT rate of qualified starters, ranked 7th in completion percentage at 48% (like I said, sign of the times) and his nearly 1:1 touchdown to interception ratio was acceptable.

He started the first two games of 1958, dropping the first contest to the 49ers before being blown out 45-12 against Cleveland the following week. That day, Morrall nearly threw as many passes to the Browns (four) as he did to his teammates (seven). Parker traded him to Detroit for Bobby Layne days later. A move that literally made the front page of the Post-Gazette. 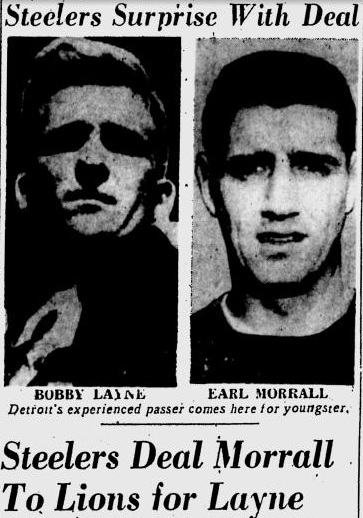 “I don’t think Morrall is a top flight quarterback…with the addition of Layne, we may get back in the race.”

Pittsburgh did get back in the race, finishing 7-4-1, but still missed the playoffs.

The commonality with all three of these players is Layne. Pittsburgh traded for him early in 1958 and no question, Layne was a fantastic player. Third best QB in team history, behind only Roethlisberger and Bradshaw. But he was 32 when the team dealt for him, a win-now mentality for a team that was anything but. Morrall was dealt to get him, Dawson continued to be glued to the bench because of it, and Kemp was already long gone while the team played musical chairs at the position.

Having any one of Dawson, Morrall, or Kemp for the length of their careers could’ve changed the course of the franchise.. At some level, the franchise had an eye for talent. But their eye was as good as their patience was bad. Emblematic of their decision-making, they didn’t let talent play, grow, and develop into cornerstone pieces.

It’s one of the most egregious coaching and front office mistakes in NFL history. The modern-day equivalent of having Patrick Mahomes, Matt Ryan, and Cam Newton all on your roster and getting rid of them all almost as quickly as they came. An almost impressive level of failure.