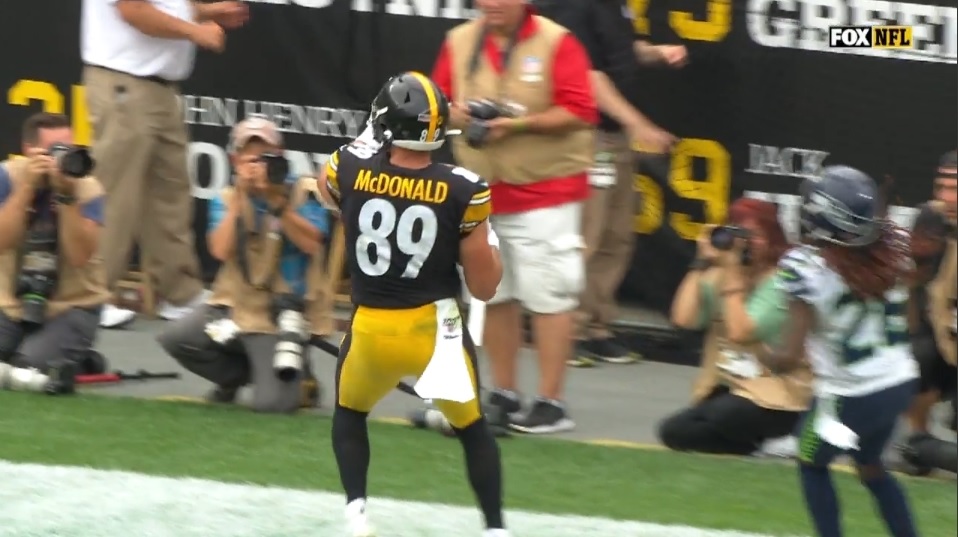 While playing around at Pro Football Reference and came across a statistic that I thought was intriguing. In 2018, while playing with Ben Roethlisberger, Vance McDonald had 50 receptions and 33 of those when for first downs. Sixty six percent seemed like a pretty good number and was on par with guys like Travis Kelce (66%) and George Kittle (68%). That was good for 5th in the AFC among TE’s.

Then I checked Eric Ebron’s numbers and they were similar. Over the last two seasons, Ebron had 97 receptions of which 64 were first downs (66%).

In 2019, the Steelers working with backup QB’s understandably ranked low according to teamrankings.com. They were 30th in the league in first downs per game. In 2018, with Big Ben running the show they were 5th and that was with the top five in receiving yardage being JuJu Smith-Schuster, Antonio Brown, McDonald, James Conner and Jesse James.

I wanted to take a look at McDonald and Ebron’s first down production to see when and how they produced to move the chains. What types of routes were they used on? Where did they line up? Was the majority of the production on third down?  Also, I kept an eye out for multiple tight end sets to get an idea of what we might see in 2020.

It was understandably a tale of two seasons over the past two years for McDonald.  In 2018, he was what they had hoped for after they traded for him in 2017. He had 50 receptions for 610 and 4 touchdowns yards highlighted by his 75 yard touchdown against Tampa Bay. Per Next Gen Stats, he averaged 3.3 yards of separation, his average depth of target was 5.7 yards and his yards after catch per reception was 7.9 yards (tied for 3rd in the league)

His 2019 statistics took a downward turn playing with backup quarterbacks dropping to 38 receptions and 273 yards. His separation numbers increased to 3.8 yards (2nd in the league) while his depth of target dropped to 4.6 yards and yards after they catch dropped to 4.7. So while he was still getting open, shorter routes and inaccurate passes effected his production.

I looked all his targets from 2018 to get an idea of his most effective routes when creating first downs.  The first half of the season he produced more first downs on early downs. Later in the year he was used more on third down to keep drives alive. He was used primarily on the short and intermediate levels while mostly aligned inline or on the wing. He was also used out of the backfield, out wide and in the slot.

Curl (17 targets) – It’s not the most exciting route but it is effective whether finding space vs Zone or boxing out a defender in Man. Here against Tampa Bay he works behind the linebackers at about 10 yards and moves with the QB staying in the throwing lane as he’s buys time.

Screen (11 targets) – I honestly forgot how effective this play was in 2018. They ran it from multiple alignments (inline, tight slot) and this one is in 01 personnel with McDonald shifting to the backfield against the Raiders. He shows good ability after the catch gaining 24 yards from the catch point.

Flat (10 targets) – This route is usually from inline or on the wing and can be with or without a chip at the line of scrimmage. A simple release and another good example of him gaining yards after the catch.

He also played with different QB’s with Andrew Luck in 2018 and Jacoby Brissett in 2019. He had a Pro Bowl season in 2018 with 66 receptions, 750 yards and 13 touchdowns. He averaged 3.4 yards of separation; his average target was 9.9 yards downfield and averaged 3.9 yards after the catch.

In 2019, the Colts threw for nearly 1,300 yards less and an ankle injury hindered his production basically cutting it in half. He had 31 receptions for 375 yards and 3 touchdowns. His ability to separate was about the same averaging 3.2 yards as well as depth of target being 9.4 yards. He did improve after the catch with 5.4 yards per catch.

I looked at Ebron’s targets in 2018 and he was more effective on third down overall to produce first downs. He was used on all three levels while playing most often in the slot but would also align inline, on the wing and wide.

Flat (8 targets) – Like McDonald, this was a popular route for Ebron and the Colts used this often on third down.  Again, this can be run out of different alignments and with or without the chip at the line. Here against Tennessee he’s in the tight slot and will chip the Edge before releasing.  He gets about 11 after the catch including hurdling a defender.

Shallow Cross (6 targets) – This might be a better route against Zone but can be a winner vs Man as well.  Again aligned from the tight slot and will chip on the Edge before release.  The coverage is tight here but the ball placement is good up and away from the defender for a 7 yard gain and the first down.

Drive/Deep Cross (5 targets) – A good route to get in between the defensive levels of coverage. He motions out of and back into the bunch to try to determine the coverage. At the snap, the break is at about 5 yards before taking a deep angle to get to 18-20 yard depth over the LB’s and in front of the safety.

While watching McDonald I kept an eye out for multiple tight end sets the Steelers used. This might give an idea of some combinations they might use in 2020. A couple of side notes, I wish Jesse James was still around and may have been underappreciated in 2018 and Randy Fichtner is more creative than we think.

Vs Baltimore, they Steelers come out in 13 personnel with all the TE’s to the offensive right side.  From inside to outside they line up with Jesse James, Vance McDonald and Xavier Grimble. At the snap James will run a short post to the middle of the field, McDonald goes up the seam and Grimble wheels to the outside. With the Steelers at their own 1 yard line, the LB’s play run leaving James and Grimble to run free.

Vs Atlanta, again in 13 personnel this time with McDonald and James swapping alignments. McDonald releases behind the other two TE’s into a whip route. James runs a deep curl up the seam and Grimble is the target on a shallow curl in the middle.

At Cincinnati, they are in 12 personnel with a bunch formation to the left with McDonald on the outside and James in the front. James runs a deep curl to the middle and McDonald and JuJu run shallow crosses underneath

Vs Indianapolis, in 13 personnel in an empty set with McDonald wide left, Grimble slot left and James tight slot right. James will run a bang 8, Grimble looks like a deep curl and McDonald is a stop route and runs over a couple of tacklers to get the extra 3 yards and a first down.

The tight end has been an accessory in the Steelers offense for a long time.  They’ve never had a 1,000 yard receiver at tight end and have only had 14 seasons with at least 500 yards receiving and Heath Miller has nine of those.

So having a 1A and 1B at tight end is a somewhat unfamiliar concept.  The best combination that I found was McDonald and James in 2018 combining for 1,033 yards and 6 TDs. On paper, the combination of McDonald and Ebron should be able to surpass those numbers and can create match-up problems.

The addition of Matt Canada to add input to the Fichtner offense is already being noticed with McDonald talking about the possibility of more play action and motion in the offense.

Both players have the ability to win out of multiple alignments and on different routes. I know the Steelers have talked about putting more emphasis on the run but there may be too many options in the passing offense to commit to that style. If both McDonald and Ebron return to their 2018 form, and I think they can, this offense may be just as formidable as the defense.