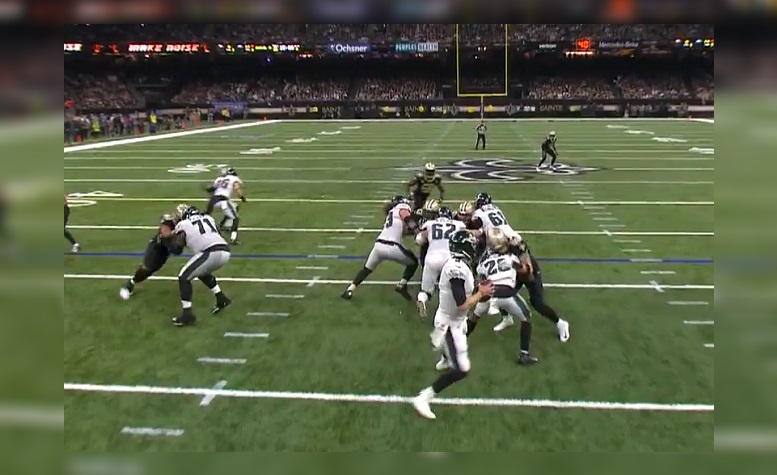 The Pittsburgh Steelers signed free agent running back Wendell Smallwood last week and now the West Virginia product will battle during training camp for a spot on the 53-man roster, which could ultimately include four total running backs. One of the man things that Smallwood will likely need to show the Steelers in the coming weeks to help his roster chances is that he can be counted on to pass protect and play on special teams. A look back over his first four seasons in the NFL with the Philadelphia Eagles and Washington Redskins shows that he’ll likely be able to show the Steelers he can be reliable in both of those phases. Let’s take a look.

As a pass protector since being drafted originally by the Eagles in 2016, Smallwood has made noticeable gains in that phase of his game and below are a few examples of that.

One of the best pass protection reps in Smallwood’s tape collection since coming into the league is likely the play below which came against the New Orleans Saints in the 2018 playoffs. On this play, Smallwood (#28) comes across from the left side to pick up blitzing and free-running Saints linebacker A.J. Klein. Smallwood stands Klein up perfectly and it allows Eagles quarterback Nick Foles enough time to get the pass out for a first down.

Below is another example of from a 2017 Eagles game against the New York Giants that once again shows how effective Smallwood can be as a pass protector, and especially against a blitz. In this clip, Smallwood (#28) identities a free-running defensive back (#41) off the edge to his right. Instead of carrying out a play-action fake with the quarterback, Smallwood goes after the defensive back and effectively cuts him down. Even after making such a fine block, Smallwood gets up quickly and gets himself out of the backfield as a receiving option. His block allowed Eagles quarterback Carson Wentz time to extend the play to his right and find an open wide receiver down the field.

In a Week 1 2017 game against the Redskins, Smallwood (#28) once again showed that he has no issues taken on big blitzing linebackers. On this play, Smallwood steps up and effectively cuts down Redskins linebacker Zach Brown (#53) and the play results in a Wentz completion to tight end Zach Ertz.

To balance this post out just a bit and to show that Smallwood (#28) hasn’t been perfect in his NFL career as a pass protector, below are a few plays in which he failed. Both of the clips below, however, seem to be scheme related with poor decisions possibly and not a lack of want to.

After running through a good portion of Smallwood’s pass protection reps, I like what I saw. He certainly has the willingness and the ability to effectively pass protect and his technique in doing so has improved since entering the league as well. According to Pro Football Focus, last season Smallwood had a pass protection efficiency rating of 97.1 on 17 total snaps. He only allowed one pressure in total, per PFF, and it came in Week 11.

Smallwood is far from being considered an accomplished kickoff returner in the NFL. Even so, he has returned 16 kickoffs since entering the NFL for 401 yards with one touchdown of 86 yards. You can see that touchdown below. Last season with the Redskins, however, Smallwood returned just one kickoff and the most he’s had in one season came in 2016 as a rookie when he returned 9 in total.

Last season with the Redskins, Smallwood registered 5 special teams tackles and two fumble recoveries. In total, he logged 221 special teams snaps, the fourth-most on the team. The tape shows that Smallwood was used on all four primary special teams units throughout the season.

On the punt coverage team, Smallwood (#34) was used almost exclusively as the left wing and you can see two of those plays before that included him making the tackle.

The fact that Smallwood has been used as a core special teams players so far in his NFL career is enticing. Additionally, he’s had some success as a tackler covering punts and kickoffs as part of that. Smallwood’s overall special teams abilities probably won’t have coordinator Danny Smith jumping up and down on the table come the final cuts, but they also won’t hurt his cause. The fact that he can step in as a kickoff returner is just one more thing that he can do. Overall on special teams, Smallwood is a jack of all trades and master of none. Even so, he offers more to the team in that phase of the game than most other payers currently on the Steelers roster.

While not even scratching the surface on Smallwood as a runner or pass catcher, it’s quite east to see why the Steelers had interest in him and ultimately signed him for training camp. His ability to quality pass protect is noticeable and while nobody will confuse that phase of his game with someone like former Steelers running back Le’Veon Bell, I’ve seen a lot worse from a lot of other Pittsburgh running backs. Smallwood being able to be a core special teams player is yet one other reason why he brings value to the Steelers. No, he’s not a special teams assr like former Steelers inside linebacker Tyler Matakevich was, but he’s not a liability that I can see just the same. In closing, I think Smallwood has more than just an average shot at making the Steelers 53-man roster this year as the fourth and final running back along with James Conner, Benny Snell Jr, and rookie Anthony McFarland Jr.