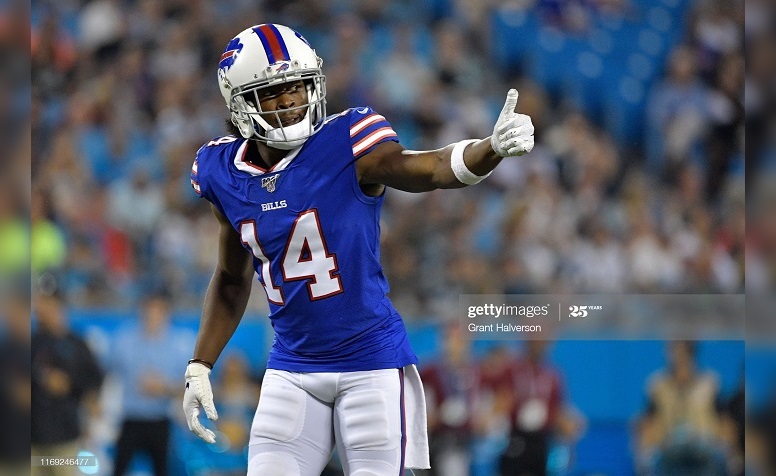 Pittsburgh Steelers wide receiver and return-specialist Ray-Ray McCloud has already made some noise since being signed on August 21st. According to Thursday night’s pool report assembled by local media, McCloud had a kick return touchdown during the special teams session of practice. It’s also been noted that McCloud has made some explosive plays on the offensive side of the ball as he’s seemingly been mentioned on the practice pool report on a nightly basis.

The amount of hype he’s received you could easily argue that Ray-Ray is this year’s “camp darling,” being the one relatively unknown player that really shines during training camp. This is why I wanted to take a deeper dive into McCloud’s game to see what he can bring to the table.

Before we get started I want to set the expectation that there’s a reason that this is McCloud’s third team in as many years in the league and being brought in so late to camp really puts him behind the 8-ball. He doesn’t have nearly the experience with the playbook or any sort of rapport with Ben Roethlisberger. So while he’s been a standout so far in camp I don’t think there’s any reason for Ryan Switzer to be calling his travel agent just yet. With that being said let’s dive in.

We will start this by looking at McCloud’s return ability as that’s going to have to be his bread and butter if he plans on making the final 53. In his six games with the Panthers in 2019 he was averaging 8.2 yards per return on ten returns. If he held that pace through the entirety of the season that would have ranked him 7th in the NFL.

As a return man the 2nd most important thing behind ball security is the ability to make guys miss. McCloud certainly checks that box. He consistently makes the first guy miss on punt returns. Naturally, on most punt returns you’re going to have a few guys run free and it only takes your returner making one or two guys miss before you’re off to the races. Unfortunately, on these clips below McCloud couldn’t fully break free but that ability makes you sit on the edge of your seat every time he has the ball in his hands.

Here’s what happens when McCloud has a little bit of blocking around him on a punt return. He again makes the first guy miss with a quick jab step then gets the next two defenders with a subtle hesitation move before jetting up between the hashes for 20 more yards.

This is by far McCloud’s biggest play in a real NFL game. It gives you a great example of what he can do in the open field with his crisp, explosive cuts. He doesn’t have elite game breaking speed, but his quickness makes him dangerous as you can see on this 39 yard punt return against the Bucs.

Here’s where we’ll start to dive into McCloud’s one glaring issue — ball security. With four fumbles on only 23 returns there’s clearly a problem there. Even during  his 39 yard punt return from above, if you look closely you can see the long snapper almost jarred the ball free on the tackle.

His four fumbles have come in a variety of ways. They’ve come on the opening kickoff of a game (he didn’t return another kick or punt the rest of 2018), they’ve come from two muffed punts in the same game, and on a return after successfully catching the punt (was released by Carolina following that game). This makes me even more concerned as it’s not as simple as just fixing one part of his game. It creates distrust any time the ball is in his hands.

The last tidbit I wanted to include about special teams is him having some tape as a gunner. As the 5th or 6th receiver on the roster you better be able to wear a lot of hats on special teams. He proves here he’s not afraid to stick his head in the fan and make a special teams tackle. Great rep.

While Ray-Ray McCloud’s usage on offense is extremely limited in the NFL I wanted to see what he was capable of in those limited snaps and how he may be deployed if he was to make the final 53.

It’s not a surprise that the Steelers are expected to integrate more pre-snap motions into their offense with the addition of Matt Canada. When McCloud was on offense for the Bills he often was used in a similar role that one would expect for the Steelers to use him. End arounds, jet motions, and quick screens to get him the ball in space.

This play looks like it was ripped right out of Canada’s 2016 offense while he was at Pitt. With the double jet motions then the underneath handoff to McCloud who’s originally lined up on the wing. He follows his pulling guard up the middle for a hard fought seven yards.

Another type of misdirection you’d expect are end arounds. While these plays aren’t going to blow your hair back, it’s nice to see McCloud does have some experience with it in the NFL.

This play took the NFL by storm a few years ago, and the Steelers often used it as a goal line or two point play. Short-motioning the outside wide receiver into bunch then flipping out a pop-pass to him. This is the ideal way to win with McCloud as it gets him into some space where he can utilize his short-area quickness as he shows here getting the first down.

McCloud hasn’t been able to put much on tape other than drag routes and underneath receptions. His stats reflect that as he averages 9.8 yards per catch on his 11 career catches (including preseason). He hasn’t been given that many opportunities to show what he can do down the field so you can’t truly knock him on that, but it’s something you obviously would have liked to see in this year’s preseason, if there was one.

Here’s one of his deeper receptions on a nice over route on Jason McCourty. You can see him press off the line then stem up field before making his cut across the field to maximize separation from the defender. Solid rep for McCloud.

This is the last thing I wanted to point out to wrap up McCloud. It’s 3rd & 6 in the 2018 season finale against the Dolphins. Josh Allen sends McCloud in a short motion and he runs a quick stick route. The obvious problem here is running this route two yards short of the line to gain. One could argue we don’t know the Bills playbook, which is true, but it’s hard for me to believe this play called the for landmark of the stick at four yards, instead of a “sit at the sticks.” This highlights McCloud’s overall inexperience and overall lack of nuance at the slot position in the NFL.

My overall feeling of McCloud was… meh. You can see the excitement in rare flashes, but those flashes are highly overshadowed by his ball security or lack thereof. With the log jam currently at receiver for the Steelers, he’d really have to blow you away as a returner for him to make the 53 as he hasn’t shown that he can offer you that much as a true slot receiver in the NFL, yet. Regardless of many fans’ preconceived notions of Ryan Switzer and the want to push him off the roster there’s simply nothing currently on tape for McCloud that suggests he’s a better player. Switzer is far and away the better route runner and a safer option as a returner. Oh, and him being buds with #7 doesn’t hurt his chances either.

Simply put, you won’t find me pounding the table for a return specialist that has fumbled on close to 20% of return opportunities. I think you can easily stash him on the practice squad and roll with Switzer to start the season. I’ll await your pitchforks.