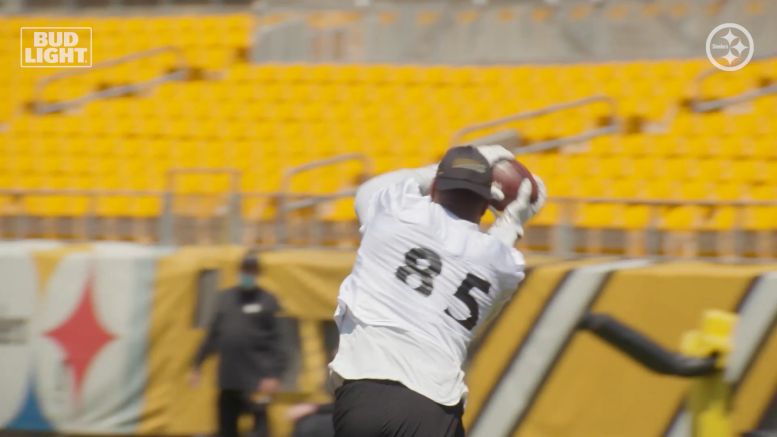 One of the most important processes that takes place when a team brings in a new pass-catcher, through whatever means, is establishing a connection between him and the quarterback. Whether it’s a rookie or a veteran signed in free agency, the process is similar, because every quarterback is different.

The Pittsburgh Steelers have a couple of new pass-catchers this year, but the real significant piece for the 2020 season figures to be tight end Eric Ebron, the veteran free agent they signed in March. The problem is, he hasn’t had much opportunity to work with Ben Roethlisberger since then, thanks to the pandemic.

While he did say previously that he spent some time at Roethlisberger’s house earlier in the offseason, where they were able to connect a bit, the bulk of the process is being staged now, during training camp, and he admitted to reporters over the weekend that there’s still a lot more to go.

“Still trying to completely understand him. You know, I haven’t had years with him, I haven’t had months with him. I’ve literally had weeks and I’m just really trying to understand some things”, Ebron said of building a rapport with his quarterback. “I believe I’m picking it up really well, and the way he thinks, because at end of the day, we can draw a lot of lines on paper, but if I’m not thinking the same thing as the quarterback, then I don’t get the ball”.

“I’m really just trying to pick his mind and see what he thinks and see what he likes and what he doesn’t like and how to run certain routes and knowing that there will be some mistakes and we’ll have to talk through some things”, he added. “It’s all been a work in progress and it’s all been so much fun, especially with a veteran like him because we see things the same and coming from two really good quarterbacks, it’s taught me a lot. It helped me visualize things with Ben a lot better. So, it’s been fun and I believe we will have a lot of fun this year”.

After having previously met at the Pro Bowl after the 2018 season, during which year Ebron caught 66 passes for 750 yards and 13 touchdowns from Andrew Luck, he was suddenly on Roethlisberger’s radar, and now he’s be one of the 17th-year quarterback’s featured targets.

Their on-field relationship may prove to be a work in progress thanks to the circumstances, but it certainly shouldn’t be detrimental to the season. The areas in which he can be most effective, such as in the red zone, can be managed, and they have a full stable of wide receivers—plus another tight end in Vance McDonald who is very close to the quarterback. Still, an athletic tight end like Ebron on the same page as Roethlisberger could be a big weapon.