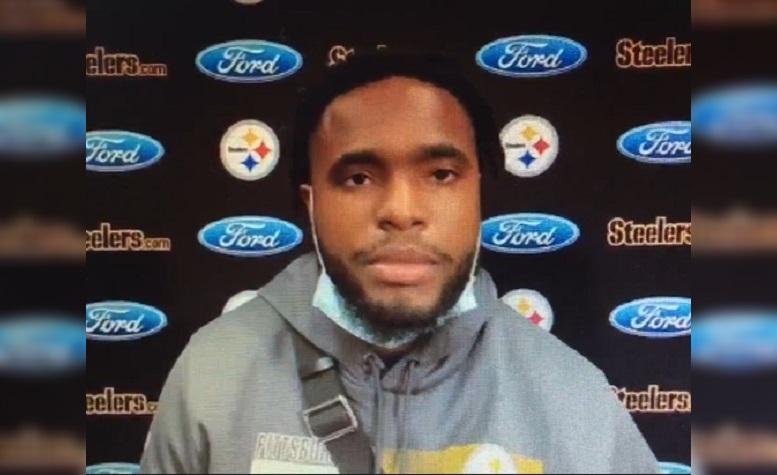 Pittsburgh Steelers second year wide receiver Diontae Johnson is poised to have a nice sophomore season after leading all rookie wide receivers in receptions in 2019. While Johnson’s rookie season included him struggling through a hamstring injury during training camp a year ago and a groin injury during the 16-game stretch, he’s much healthier this year with 40 days remaining until the team’s Week 1 road game against the New York Giants.

During a Wednesday Zoom call with the media, Johnson was asked about the sports hernia surgery he had earlier in the spring and the Toledo product indicated he’s now fully recovered from that. He said he’s now “100 percent.”

Diontae Johnson said he is 100 percent right now after having hernia surgery this offseason.

Johnson also confirmed on Wednesday that he’s gained a little weight this offseason and that he’s gone from 180 to 191-pounds. That extra weight shouldn’t slow him down and should help him be a little more physical out in his routes.

Steelers WR Diontae Johnson says he's gone from 180 to 191. Adds that Ben's fastball is just fine. "Yesterday, nice tight spiral. He's going to put the ball where he wants it."

As far his growth in his second NFL season goes, Johnson indicated on Wednesday that he can “be a home run hitter for the offense because of his ability to make plays off the line, off his breaks and down the field.”

Diontae Johnson said he can be a 'home run hitter' for the offense because of his ability to make plays off the line, off his breaks and down the field.

Johnson, in case you missed it, indicated earlier in the offseason that his goal is to have 1,000 yards receiving in 2020 in addition to being named an All-Pro and Pro Bowler again as a punt returner

“The ultimate goal is to win a championship,” Johnson said earlier in the offseason. “My goal is to have at least 1,000 yards and the Pro Bowl. I also want to be an All-Pro punt returner.”

A few days ago, new Steelers wide receivers coach Ike Hilliard talked briefly about the things that Johnson needs to do in 2020 to make his expected second year jump.

“Diontae [Johnson] needs to continue to grow, put detail in his work and mature, things of that nature,” Hilliard said.

The fact that Johnson put together the kind of rookie season that he did in 2019 was impressive on several levels as not only did the Steelers offense lose starting quarterback Ben Roethlisberger for good just six quarters into it, the young wide receiver also had to work through a groin injury to boot.

Johnson ended his rookie season with 59 receptions for 680 yards and 5 touchdowns and his 2020 totals in all three of those statistical categories should increase now that he’s healthy, sturdier and has a year of NFL experience under his belt. Johnson might very well be the most overlooked second-year wide receiver in the NFL entering 2020 as he’s poised to have fantastic sophomore year.