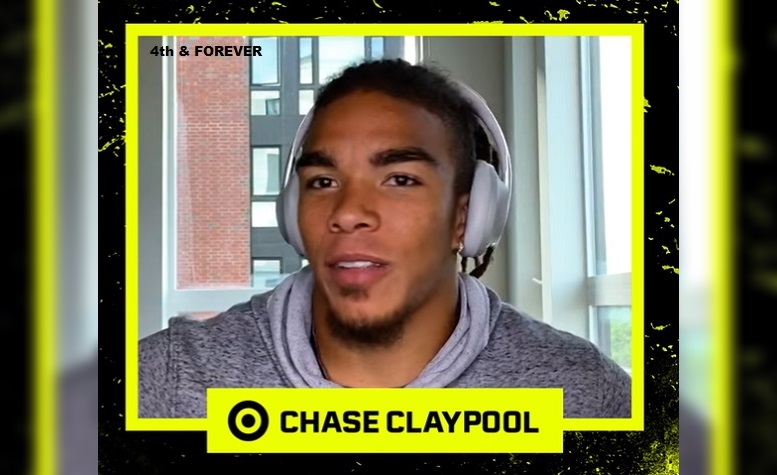 Will Pittsburgh Steelers rookie wide receiver Chase Claypool get to contribute much early in the 2020 season? It’s hard to say for sure and especially with him not having any sort of team offseason practices due to the coronavirus. Even so, Claypool said in a recent interview with Mark Sanchez on his show, ‘4th And Forever,’ that he thinks he can help out the Steelers offense immediately in an area they struggled in quite a bit last season, which is the red zone.

“I think the biggest red flag for them last year was their red zone efficiency,” Claypool told Sanchez. “And I think that’s kind of the immediate impact that I can make is red zone efficiency and kind of adding a threat in that offense. And then beyond that, I honestly think that I’m kind of one of those guys who can make an impact on special teams and then throughout the entire offense. And I’m going to use special teams and the red zone to kind of prove myself and then hopefully the coaches kind of realize what I can bring to the table.”

What Claypool said certainly makes a lot of sense and especially right out of the chute. His experience in college at Note Dame as a gunner on the punt coverage team should be more than enough to get him a gameday helmet starting in Week 1 on the road against the New York Giants. Additionally, Claypool being such a big target, combined with the success he had inside the red zone at Notre Dame throughout his college career, should allow for him to get some initial snaps in the Steelers offense whenever that unit is inside their opponents’ 20-yard-line.

If Claypool can make a few plays early in the season inside the red zone, or even outside the red zone if given limited opportunities, that success would figure to lead to him gaining increased playing time as the season goes on. New Steelers wide receivers coach Ike Hilliard even said as much this pat week when talking about Claypool during a media session.

In addition to laying out to Sanchez the ways he thinks he can contribute initially with the Steelers, Claypool also revealed what his long-range goals are as well with training camp now underway.

“So, obviously you want to be a guy who wants to win a Super Bowl and that’s me,” Claypool said. “I think that tops my list. I don’t have to be in the Hall of Fame, or I don’t have to be a Pro Bowler, although those are my goals. My number one goal is to win a Super Bowl. I would just think that would kind of put a stamp on the journey that I have been through. Having watched like every Super Bowl growing up as a kid and then being able to play in one and win one would kind of put the exclamation point on my journey as a football player.

Those are some great long-term goals for Claypool and hopefully he can achieve that primary one of winning a Super Bowl as a rookie and play a nice part in the team accomplishing that.

If you want to see the full interview with Claypool you can watch it below.