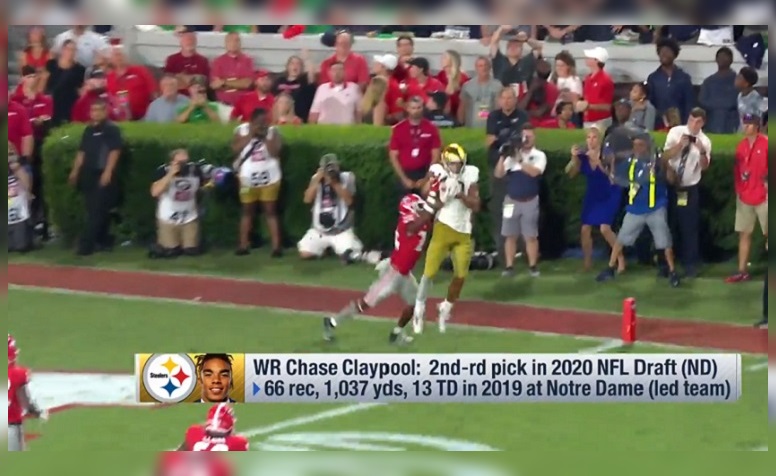 “Chase Claypool, wide receiver out of Notre Dame, now what they’re [the Steelers] getting with him in their eyes is a size, deep receiver,” Casserly said on the NFL Network a few days ago. “Now, he’s a size, deep receiver because of his size, not necessarily his speed. He ran 4.43 [seconds] at the combine, but when you watch the tape, to me he’s a 4.55 [seconds], one-speed guy.

“But he’s a big, physical guy that’s going to win the matchups down the field and we all know Ben gets the ball down the field. Immediate impact is going to be in the running game as a blocker. He’s excellent there and a good special teams player. In their eyes, he’s going to have a role every week along with JuJu [Smith-Schuster] James Washington and Diontae Johnson.”

As we’ve already shown on this site since Claypool was drafted, he was a great combative catcher down the field at Notre Dame and made an impact with his size in the red zone during his college career. In fact, Claypool had 13 red zone touchdown receptions during his career at Notre Dame. While Claypool was a very reputable blocking wide receiver during his college career, that phase of his game will need a little bit of refinement at the NFL level and especially when it comes to him staying on his blocks and finishing.

Is Claypool’s blocking ability, especially in the running game, already good enough to get him on the field outside of the red zone early in his rookie season? Possibly, but it’s worth pointing out that fellow Steelers wide receivers JuJu Smith Schuster and James Washington are both already established as run blockers.

While I certainly think Claypool’s future with the Steelers will include him being a very above average run blocking wide receiver, I’m not yet of the mind that that is what the Steelers will be focusing on with him as a rookie when it comes to carving out early-season snaps for him. Instead, the initial impact that Claypool will likely make with the Steelers when it comes to the offensive side of the football will be in the red zone. He’ll also likely see other limited playing time outside of the red zone on passing downs when the Steelers use personnel groupings with three or more receivers.

Yes, I agree with Casserly when it comes to Claypool making an impact on special teams and especially as a gunner on the punt coverage team. As for Claypool possibly being used early and often offensively in the Steelers running game, I’m going to have to see that happen to believe it. While I think Claypool’s an extremely talented and well-rounded player as he enters the NFL, the lack of an offseason makes it easy to speculate that his early-season usage will be tempered to the few things he does really good, with one of them being a big and reliable red zone target.