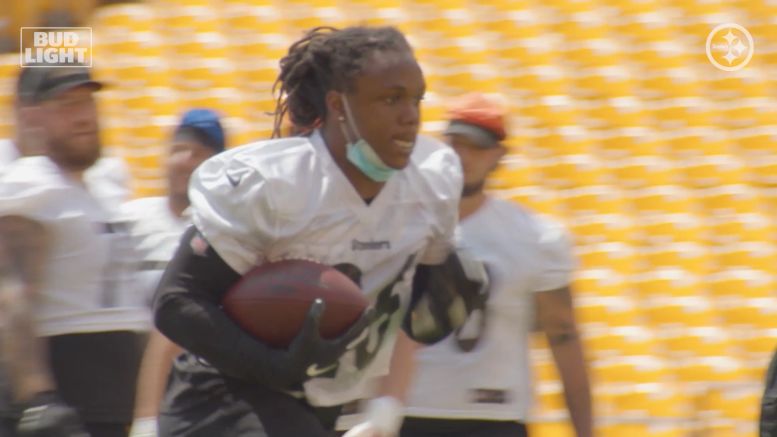 The Pittsburgh Steelers did not have a big rookie class this year, but they did bring in a group of young players whom they believe in, from second-round pick Chase Claypool to seventh-rounder Carlos Davis. It may not be the case that all of them will make the 53-man roster—I’m not sure that’s ever happened in team history—but they all seem to have certain common qualities, as running back Benny Snell talked about earlier today before practice.

“Their love for football” was something that he found to be universal among them, he told reporters just a short while ago. “They have a love for the game. They want to get better. They maximize what they can do when we’re out there on the practice field. It’s an exciting group”.

Needless to say, this is a quality that would appeal to Snell, as that was what the Steelers liked about him coming out of Kentucky last year. They spoke with him in the pre-draft process and his own love for the game of football was evident, talking about Benny Snell Football.

Though he had some growing pains as a rookie, as all players do when they first make the transition from the college level to the pros, he also told reporters yesterday, indirectly, that he is now in a place where he feels he can help others. ”I’ve caught myself teaching a few guys some things that I was questionable about last year, being a rookie myself”, he admitted, in speaking about the rookies.

The Steelers did add one rookie at his position, drafting a running back in the fourth round for the second year in a row (and in the middle rounds for the fourth year in a row), this time Anthony McFarland out of Maryland. You can bet that Snell is in his ear, or at least metaphorically from a safe distance, whenever possible.

The Steelers struggled on the ground last season, finishing 29th in rushing yards and 30th in both rushing touchdowns and yards per attempt, though for as poor as their offense played in the run, their defense played about equally as well.

Over the course of the season, each of their top three running backs dealt with injury, including Snell, who underwent a cleanup procedure on his knee midseason, which kept him out of three games. But he still managed to log over 100 rushing attempts on the season, the most by a rookie Steelers back since Le’Veon Bell in 2013.

What kind of role there will be for him in 2020 is not yet sorted, as James Conner is still projected to be the featured runner. While the latter struggled to stay on the field due to a litany of injuries, he looked like the best player on the field often enough when he was out there.