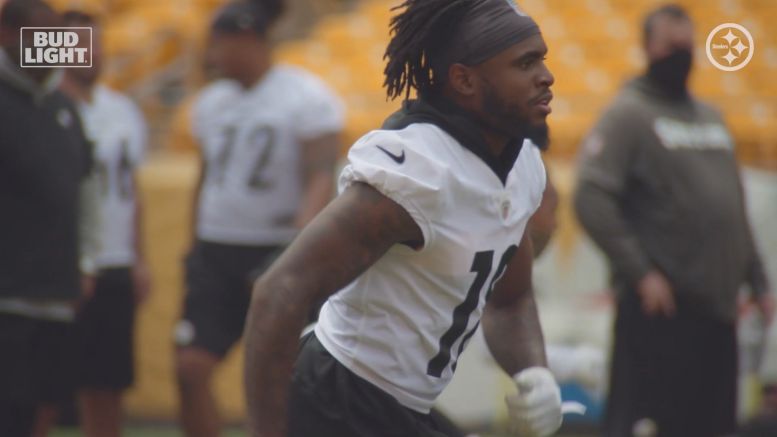 Three of the Steelers’ top six wide receivers either failed to practice yesterday or failed to complete practice, some for unclear reasons. JuJu Smith-Schuster, for example, has been held out of practice for the past two days. He is 23 years old. Even aging veterans don’t get two rest days off.

Second-year Diontae Johnson has also now missed several practices in a row. On Friday, Mike Tomlin listed him among “new guys with minor ailments that could be described as day-to-day”, and since then, he has not returned to on-field practice participation.

A new injury was to Ryan Switzer, who suffered a foot injury in yesterday’s practice and was unable to finish. The exact nature and extent of his injury is unclear, but as of now, he is projected to be inside the bubble to make the 53-man roster.

On the plus side, James Washington, who started training camp on the reserve/Covid-19 list, recently missed time with a minor injury of his own but was able to work himself back into action lately, and in fact has been turning heads.

In the absence of some of these other guys like Smith-Schuster and Johnson, it has provided additional opportunities for the likes of rookie Chase Claypool and Deon Cain to see quality reps, and especially the former, according to the pool reports, has been making the most of those chances.

While it’s good to see these opportunities used appropriately, we really don’t need to see Johnson missing practices again. He is only a second-year player and he already battled through a groin injury throughout his rookie offseason, ultimately having it surgically repaired after the season was over.

He is a young guy who has breakout potential, but he also has few reps with Ben Roethlisberger, so every opportunity missed is significant. The sooner he gets back on the field, the better. Perhaps Smith-Schuster missing time isn’t so big a deal given his background, but Switzer also can’t really afford to have a setback, being potentially on the bubble.