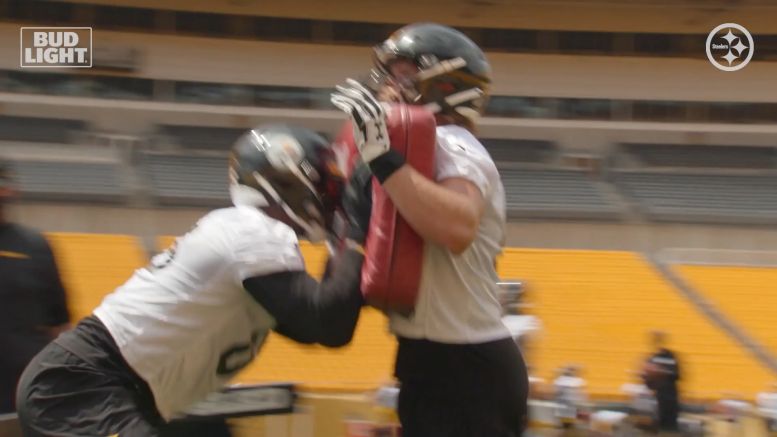 While the Steelers will occasionally branch out and bring in a player who doesn’t necessarily hard-check every box they would ordinarily like to tick off for a given position, they still typically approach their coaching and development in the same manner.

Seventh-year veteran tight end Eric Ebron is the latest case in point. By and large, he is a receiving tight end—to such an extent that over the past two seasons, the Indianapolis Colts apparently did not even have him hitting the sled. Since the pads came out, Mike Tomlin has been watching him hit the sled as often as possible, however.

That’s as clear a signal as any that the Steelers have certain expectations for the talent tight end that go beyond perhaps what he has become accustomed to. Plain and simple, he’s going to be asked to be an in-line blocker at times, more times than he might care for.

Pittsburgh seems to be one of the few teams who strongly covet that bigger blocking-capable tight ends above all others. General manager Kevin Colbert seems to frequently discuss the general dearth of that type of prospect coming out of college anymore, making it harder for them to find the type of tight ends who fit their system.

When James Daniel spoke about Ebron earlier in training camp, he basically dismissed the type end’s NFL tape, essentially saying that they scouted him when he was coming out of college and that they had a certain view of what the would be capable of doing at this level, and that is what they’re working from.

Needless to say, he is a receiving tight end first and foremost and he should be expected to do a lot of that. But he’s also going to be asked to do more of the dirty work than he may be used to. It’s up to him to buy into that and give it is maximum effort.