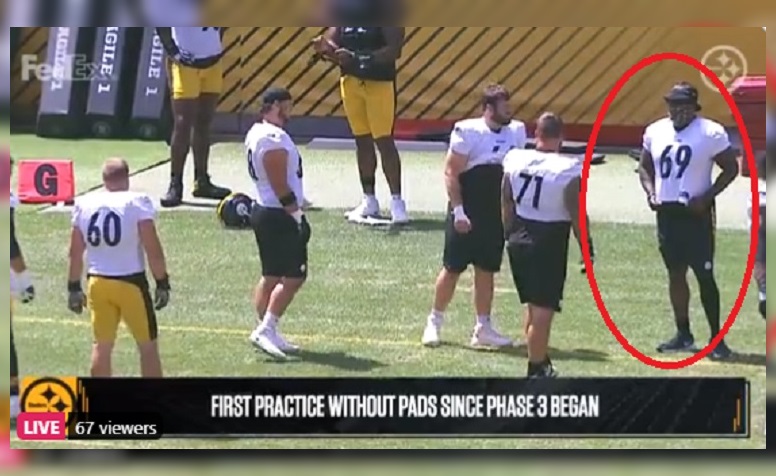 Reasoning: After going down with a knee injury and being helped off the field by Ben Roethlisberger during Tuesday’s practice, Mike Tomlin told reporters that his injury appears to be short-term in nature, avoiding a major injury.

While it’s not clear how much time he may miss as a result of the knee injury that he suffered earlier in the week, the fact that evaluation appears to show that he avoided a major issue is a big win for rookie offensive lineman Kevin Dotson as he competes for a spot on the 53-man roster.

While it would be pretty unlikely for him not to make the team simply due to the lack of depth that the team has beyond its top seven linemen thanks to recent hits they’ve taken in that area, Mike Tomlin would be the first to tell you that everyone is always competing for their job, and he wouldn’t be the first late-fourth-round rookie not to make the cut. The last time the Steelers cut a fourth-round pick was Doran Grant in 2015, though he was later re-signed.

As for his rookie year, Dotson is looking at serving as the eighth lineman, which, as of the latest CBA, is a position that teams would be permitted to dress without penalty this year against their active roster for games. Teams simply either dress an eighth lineman or they don’t, like the old third quarterback rule.

A mauling guard out of Louisiana-Lafayette, the young man wasn’t even invited to the NFL Scouting Combine this year, and of course didn’t get to have a Pro Day either, yet the Steelers made him the first player without an invite to be drafted this year.

While it would be unrealistic to expect him to start as a rookie, the team probably does view him as a potential starter down the line—especially if Matt Feiler starts at left guard this year and then leaves in free agency in 2021, or has to move back to tackle due to free agency losses. Thus, any experience he can get this year, especially given the limited offseason, is vital.