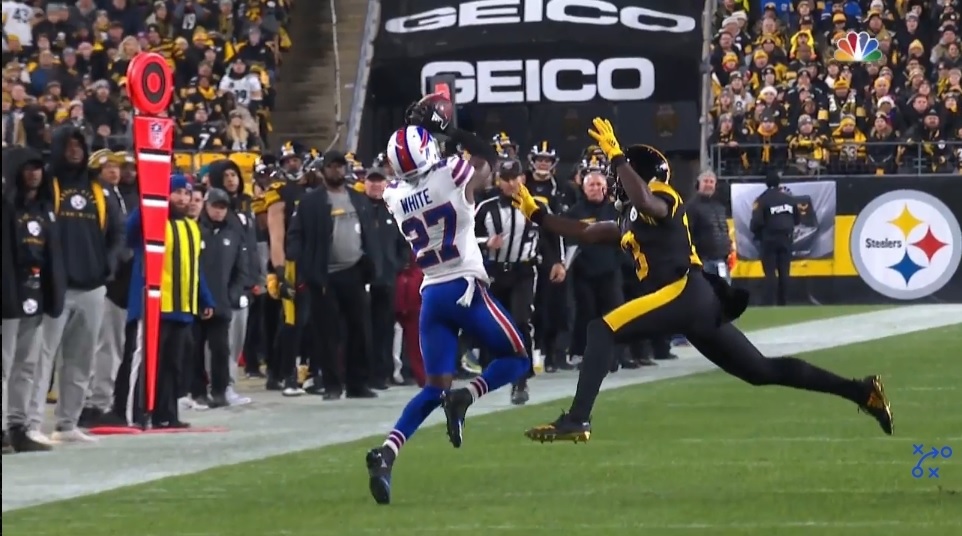 Drive Overview: Double-digit plays. And yards. And points! The best first drive of the season by far for the Pittsburgh Steelers. Pittsburgh comes out throwing again, running their classic Hank concept out of 11 personnel. Hodges quickly reads curl/flat to the weakside, dumping it off to Jaylen Samuels with the CB driving on Diontae Johnson and the underneath LB not getting enough width off the snap. Samuels shows good speed to outrun the LB and picks up 18 on first down.

Steelers try to run on 1st and 10, running power with LG Ramon Foster pulling. But they get terrible frontside down blocks, ugly attempts by James Washington and especially Vance McDonald (he may have gotten his footwork wrong here with the ROLB outside shade, so McDonald tried to wait before stepping down and washing him) and Foster gets caught up in it all. Can’t allow frontside penetration on power or the play falls apart. Samuels tackled for a loss of three.

But they get it back. 2nd and 13, Kerrith Whyte with a great read and cut to run behind David DeCastro and burst upfield for a gain of 13, moving the chains.

Tough path w/ McFarland but like his vision and ability to get vertical with good burst. #Steelers pic.twitter.com/Nf5l6CJ1AD

Back to the run on 1st and 10. Failed split zone, Samuels picking up just one yard. Hodges is sacked on 2nd down, we blamed half on Hodges, half on DeCastro in our write-up, setting them up for 3rd and 13.

Hodges quickly checks down to Trey Edmunds on 3rd down, gaining only seven but the Cardinals are called for a helmet-to-helmet hit that gives the Steelers a fresh set of downs.

The fourth running back to appear on this drive, Benny Snell churns ahead for gains of 5, 4, and 3 on consecutive carries. Toss on first down, pin/pull on second down, duo on third down. Snell showed patience, ability to squad his shoulders, and high knees to finish runs and avoid getting tripped up at the LOS.

Samuels rotates back in for 1st and 10 and continues to get no blocking ahead of him. One yard gain. Hodges looks off a wide open Zach Banner on 2nd down, scrambling to his right for six, bringing up 3rd and 3 from the Cardinals’ 12.

Nothing open on third down for Hodges and he makes a risky, off-balanced throw to Samuels, who makes a nice grab before getting lit up by LB Jordan Hicks. Should’ve been a flag on this play that kept the drive alive.

Blame: Can’t put a lot of blame here since this was a successful drive, by far the most successful one of the season. Granted, it was extended only because a defensive penalty but there were at least positive moments, both individually and play-calling. Did like the use of pre-snap motion, especially early on, to help uncover man/zone clues. Big help on a young QB to give him that key (defenses can lie about it, of course, I recognize that).

Backs did well on this drive and though I rag on the guy a lot, I feel bad for Samuels, who got no help on this possession.

Drive Overview: Well things get off on another good foot. James Conner for 15 yards on 1st and 10, getting by the nickel corner and some nice downfield blocking by James Washington and Deon Cain. Another run on 1st and 10 again with some strong frontside blocking but Ramon Foster loses his block on Jordan Phillips, turning it into only a two-yard gain.

2nd and 8 curl flat. Harry concept (curl/flat combination, no over the ball Hank route) with Hodges looking for Diontae Johnson on the slant but the throw is inaccurate, too far out in front.

3rd and 8, Hodges finding Johnson this time. Really impressive play by Johnson to come back to the football and make a tough, combative grab for a first down.

1st down again and for what feels like every game now, they run Hank. This time out of empty. Poor read by Hodges to try and throw the over the ball route. Should’ve hit the flat with the CBs playing off. We noted Rudolph having this problem earlier in the year. 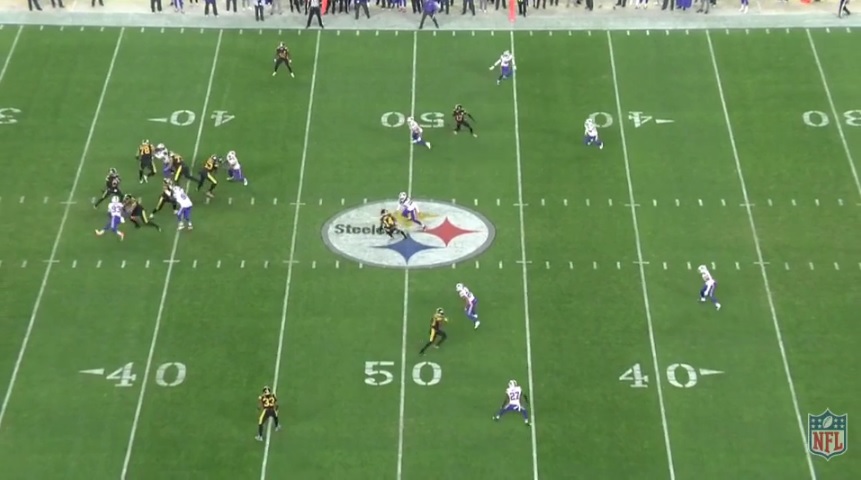 Hodges’ pass is incomplete for Tevin Jones. 2nd down run has James Conner trying to cut back – unsuccessfully – with the Steelers called for illegal motion that bumps them back five yards anyway. 2nd and 15 is a fake end around screen in the right flat to Conner. He does his best to make something happen but the completion goes for no gain. Now it’s third and forever.

Steelers run three clearout routes and Hodges throws a lameduck into double coverage, picked off by CB Tre White. Hodges did himself no favors drifting in a clean pocket and causing the pressure. Stunt pickup would’ve been find had Hodges not shifted to the right.

Blame: Really began to feel the poor QB play to close out the year. Not a good drive for Hodges and it ends with a pick. Put this one on him, not playcalling.