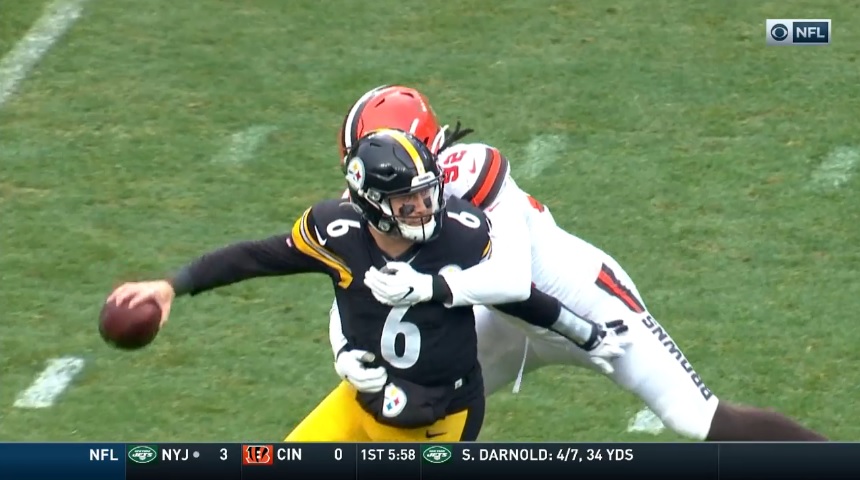 Drive Overview: To be a little fair to Pittsburgh and their flailing, 2019 offense, this drive started with them backed up on their own goal line. Bengals punter Kevin Huber’s punt pinned the Steelers at their own two to begin the game.

On first down out of 13 personnel, they run a man-blocking concept with Benny Snell surging forward for two yards to give them some level of breathing room. Line doesn’t get much of a push but Snell keeps fighting to get something out of the play. 2nd down produced similar results, again out of 13 personnel, with Snell potentially making a bad read to try and bounce the run, turning into a one-yard gain.

So now it’s 3rd and 7 from the Steelers’ five. Max protect with the backs/tight ends checking and releasing with the receivers running three independent curls. No one gets separation, there’s no concept to stress the defense with the Bengals dropping seven. Rudolph hurriedly trying to avoid a safety, flings it to Snell in the left flat. Pass is off the mark and Snell has to make an impressive catch to avoid a potential INT. Steelers punt.

Blame: Difficult spot to be in to open up the game and these specialty situations naturally get you off script. Didn’t love the playcalling here though. Pittsburgh going heavy personnel invites defenses to sell out the run, which the Bengals did with LB blitzes into the A/B gaps, and the design on third down was pretty dreadful.

Drive Overview: Just when you think it can’t get any worse. Steelers actually get a nice kick return, Kerrith Whyte Jr. taking the ball out past the 40. 1st and 10 run with Jaylen Samuels, who shows decent vision to press the LB and find a lane though it would’ve been better if Vance McDonald didn’t have a terrible block on the ROLB.

After running 11 personnel on that play, they trot out 13 personnel on 2nd and 7. Invites Browns to load up the box and the line fails to get a push, Villanueva, Finney, and DeCastro all struggling. Benny Snell only gains one.

3rd and 6. Matt Feiler gets beat around the edge though Duck Hodges doesn’t help by trying to bail the pocket instead of stepping up and he gets sacked for a whopping 13 yard loss. Steelers punt.

Blame: Like Week 12, dislike the idea of going so obviously run heavy with personnel on 2nd down. And there were some player failures, Feiler and Hodges, on third down that led to the sack.