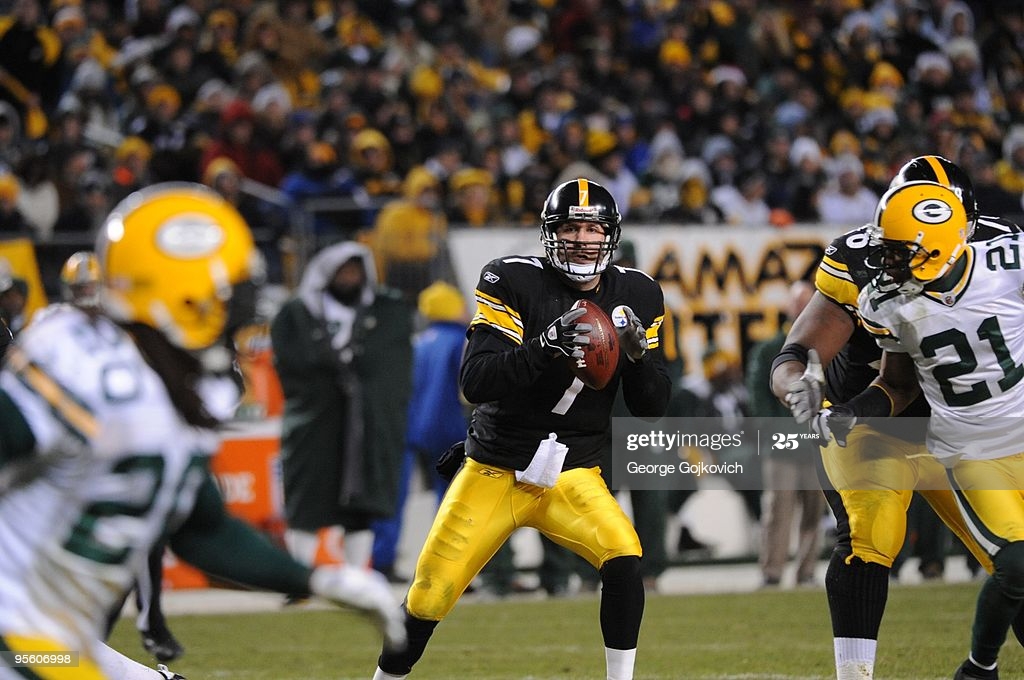 The 2009 season was one filled with inconsistent play and heartbreaking last-second losses for the Pittsburgh Steelers, fresh off of a sixth Super Bowl victory the year before.

Heading into Week 15 of the 2009 season, the Steelers were riding a four-game losing streak that saw them fall to 6-7 to that point in the year. It wasn’t going to get much easier with star quarterback Aaron Rodgers and the Green Bay Packers riding into town for a primetime showdown at Heinz Field.

Fortunately, the Steelers had Ben Roethlisberger on their side.

Opening up the Week 15 showdown, the Steelers struck quickly as Ben Roethlisberger found Mike Wallace from 60 yards out just 40 seconds into the game, staking the Steelers to a 7-0 lead.

This is vintage Ben, buying time in the pocket with the rollout to his right, finding the speedy Wallace deep behind the Packers’ secondary to ignite the home crowd. Man, it’s fun to see 17 get deep again.

The Packers’ offense was unfazed though as Rodgers found a childhood favorite of mine in Greg Jennings wide open down the seam, resulting in an 83-yard touchdown to tie the game at 7-7 just five minutes in.

With Troy Polamalu out for this game with an injury, the Packers went right after Tyrone Carter, and boy is that a play he’d like to forget.

The Steelers’ offense – sparked by Wallace’s quick-strike to open the game – methodically marched down the field on their next possession, turning to running back Rashard Mendenhall to give them the lead again.

Just look at that effort. I know Steelers fans will never forgive Mendenhall for the fumble in the Super Bowl loss to the Packers, but he was a darn good running back when healthy in Pittsburgh.

You also have to love seeing Doug Legursky lined up at fullback here.

Holding a 14-7 lead, things quieted down for the Steelers offensively, but so too did the Packers’ offense as the two teams traded punts back and forth until late in the second quarter when Rodgers went to work.

Taking over near midfield following a Steelers’ punt from deep in their own end, Rodgers quickly hooked up with Donald Driver for 8 years, two completions to Jennings for 7 yards each, and then a 12-yard strike to James Jones, pushing the Packers into the red zone.

A few plays later, knowing the Packers were going to need to throw the ball, the Steelers dropped a number of defenders into space but failed to account for Rodgers’ athleticism and mobility, leading to a 14-yard scramble for the game-tying touchdown.

Rodgers sure doesn’t move like this nowadays, but man was he so tough to defend at his peak.

Green Bay’s touchdown to tie the game seemed to be a bit deflating, but Roethlisberger was on the other side and executed the two-minute drill before the half to perfection, hooking up with Miller for 27 yards and Holmes for 33 yards before finding Mewelde Moore from 10 yards out to give the Steelers a 21-14 lead with 30 seconds left in the half.

Coming out of the half the two teams traded punts before Pittsburgh tacked on.

The Packers didn’t go away though as Rodgers fired footballs through the air to march Green Bay down the field, lofting an 11-yard touchdown to Jermichael Finley over Ryan Clark in the left corner of the end zone, making it a 24-21 game early in the fourth quarter.

Pittsburgh later took a 27-21 lead on a 34-yard field goal by Reed, but the Packers struck again as running back Ryan Grant weaved his way through the defense for a 24-yard touchdown run with 7:58 left in the game to give the Packers a 28-27 lead.

Reed then answered with a 43-yard field goal to make it 30-28 Steelers. Then, the Steelers inexplicably went for the onside kick, which failed as Ike Taylor touched the ball too early, giving the Packers great field position.

True to Pittsburgh form that year, heartbreak appeared to be in the making as Rodgers drove the Packers right down the field thanks to 9- and 10-yard completions to Finley, setting up the go-ahead touchdown pass to Jones from 24 yards out.

Fortunately for the Steelers, the Packers failed on the two-point try, giving the Steelers’ offense a chance to tie and win the game.

That’s just what happened as Roethlisberger found Holmes for 32 yards and Miller – making an unreal sideline catch – for 20 yards, putting the Steelers within striking distance.

Roethlisberger turned to Miller one more time, gaining 15 yards over the middle, leading to the Steelers’ final timeout of the game.

With three shots at the end zone the Steelers came up empty on the first two.

Just three seconds remained on the clock and it was time more Roethlisberger magic.

The future Hall of Famer turned to Wallace again, threading perfect backshoulder throw to Wallace at the front pylon, allowing the standout receiver to get two feet in as time expired, tying the game.

Reed then kicked the game-winning extra point, giving the Steelers a thrilling 37-36 win to snap a four-game losing streak, sending the Steelers on a three-game winning streak to close the season.

In the win, Rodgers and Roethlisberger combined to throw for 886 pass yards and seven total touchdowns. Ward and Miller each finished with over 100 receiving yards on seven catches each, while Wallace finished with two catches for 79 yards and two touchdowns.

The two teams would meet a year later in the Super Bowl, with the Packers coming out on top in that one.