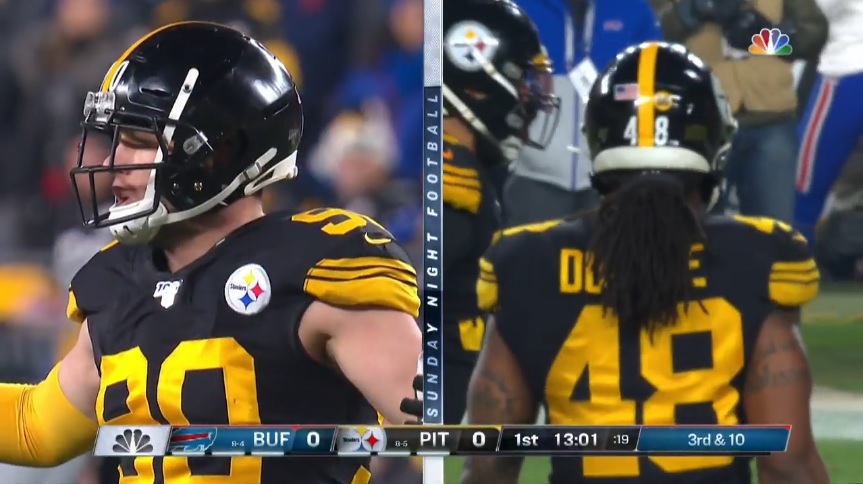 The Pittsburgh Steelers boast one of football’s top defenses. So it’s no surprise to see them given top spot in with the league’s best defensive “Big Four.” That’s how Bucky Brooks ranked the quartet of Bud Dupree, TJ Watt, Devin Bush, and Minkah Fitzpatrick.

In his article explaining the selection, Brooks wrote:

“Watt was a legitimate Defensive Player of the Year candidate with 14.5 sacks, eight forced fumbles, four fumble recoveries and two interceptions. He wrecked shop from one side, with Dupree also creating chaos from across the way…Meanwhile, Bush showcased a fabulous combination of speed, quickness and instincts that allowed him to gobble of ball carriers at every turn in his rookie season. Fitzpatrick is the cherry atop the sundae, as a game-changing playmaker in the middle of the field.”

Brooks admitted he wrestled with putting Dupree over Cameron Heyward. If this was my list, Heyward would’ve gotten that spot. Not only is he a better player but it gives the defense a face at every level – defensive line, linebacker, secondary.

Still, Dupree had a much-needed breakout season, Watt is one of football’s best edge rushers, Bush showed encouraging signs as a rookie, and Fitzpatrick was the missing link in the secondary.

This group along with the rest of the unit made up one of football’s best and most aggressive defenses. For the third straight season, they led the league in sacks and the takeaways finally followed suit. Their 38 was tops in football. Though those numbers are likely to regress in 2020, the good news is most of the personnel remains the same. The team only lost Javon Hargrave, whose pass rushing chops will be replaced by Stephon Tuitt, and Mark Barron, who will be replaced in an every down role by Devin Bush. There’s every reason to believe they’ll be a top five defense – minimum – this season.