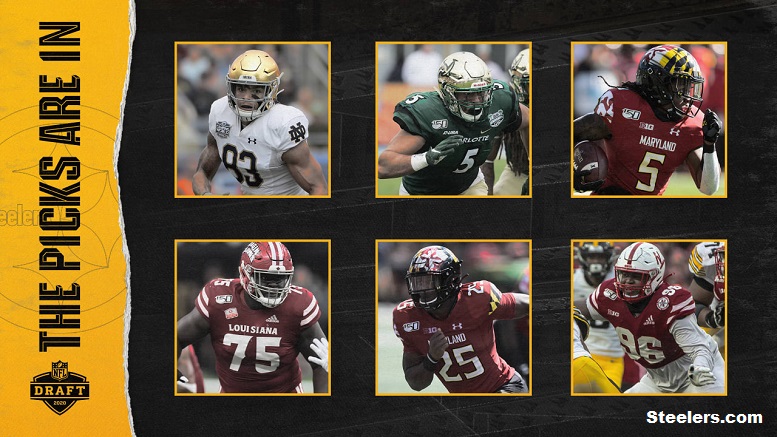 Barring any sort of grievance being filed soon by the NFLPA, most of the 2020 NFL rookies will be set to report to their respective teams as early as Tuesday, followed by quarterbacks and injured players Thursday and the rest of the rosters by July 28, NFL Media reported Saturday, citing a memo circulated to clubs. Rookies for the Houston Texans and Kansas City Chiefs, however, are scheduled to report on Monday because their season opener starts earlier than the rest of the league (Sept. 10). This all means that the Pittsburgh Steelers rookies should be reporting this coming week and within that happening, the team’s six draft picks will likely begin signing their contracts.

To date, the Steelers are still one of 15 NFL teams yet to sign any of their 2020 draft picks. Come Friday night, there’s a good chance that at least half of the Steelers six draft picks will have already signed their rookie four-year contracts and potentially even all of them.

On Sunday, Steelers rookie running back Anthony McFarland Jr., the team’s first of two fourth-round draft picks this year, hinted on his Instagram account that his signing is about to happen, or has already occurred. His four-year rookie contract should total out at around $4,017,432 and include a signing bonus of around $722,432.

Anthony McFarland Jr. must be near signing…. #Steelers pic.twitter.com/y9hWfmi6ha

There’s no reason to think that the rest of the members of the Steelers 2020 draft class, wide receiver Chase Claypool, outside linebacker Alex Highsmith, guard Kevin Dotson, safety Antoine Brooks Jr., and defensive tackle Carlos Davis, all won’t be signed by the time the team officially begins training camp on July 28.

Rookie contracts are slotted thanks to the CBA and thus there’s not much of anything to negotiate. Claypool might have a little room to negotiate when it comes to offset language but even that might be a stretch with him being just inside the first 50 players selected in this year’s draft.

The ongoing coronavirus pandemic is what has led to the Steelers not having any members from this year’s draft class signed yet. The team likely wants each player to go through a thorough physical before signings occur. Since 2011, the Steelers usually have their entire draft class signed well before the start of training camp.

The Steelers won’t need but a little less than $1 million in available salary cap space to sign all six members of their 2020 draft class due to top 51 roster displacement needing to take place.