There is no arguing that the Steelers have been one of the NFL’s top teams at producing wide receivers. The names speak for themselves. Names such as Plaxico Burress, Hines Ward, Santonio Holmes and Antonio Brown have all come up through Pittsburgh’s pipeline. By using a quantifiable measure, perhaps the distance between the Steelers and the rest of the league can be demonstrated.

Below is a table looking at the number of seasons and receivers that have crossed the 1000-yard receiving barrier for each team since 2000. Since the Steelers have been able to produce top talent like they are operating a production line, this list includes 1000-yard seasons produced even after the receiver in question departed the team. Also, this list will also solely look at receivers that were drafted, undrafted receivers are not included. 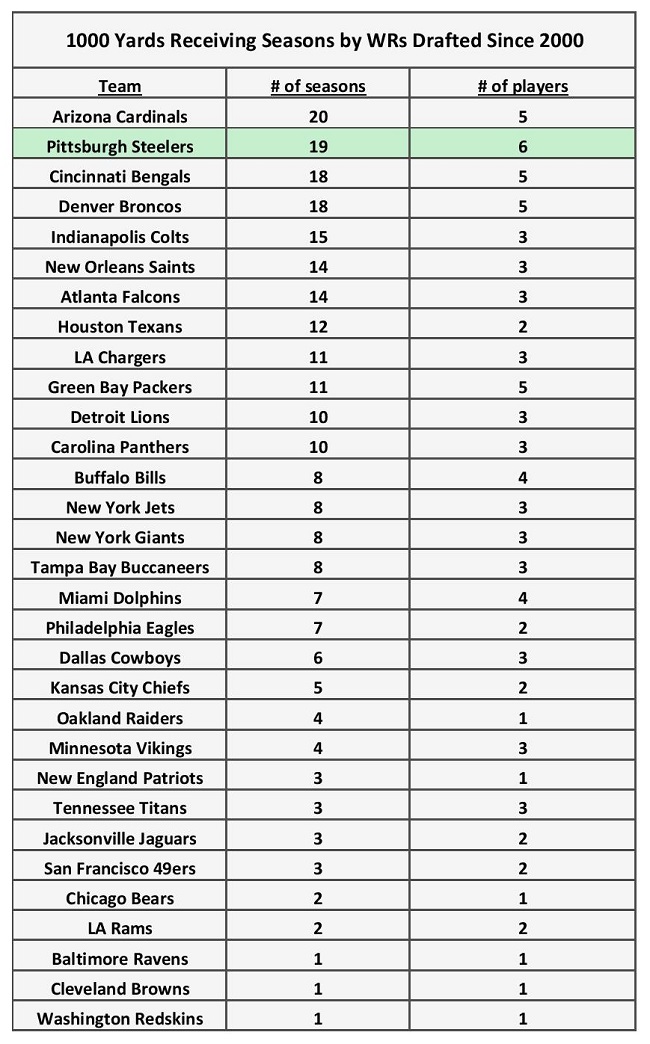 Lump me in with the many others who are likely surprised that the Steelers are not at the top of the board, though the Arizona Cardinals were bolstered highly by the longevity and consistency of Larry Fitzgerald. While the Cardinals may have topped the Steelers by a slim margin, the Pittsburgh franchise does own bragging rights in one area. No team in the NFL has produced more receivers who have produced 1000-yard seasons over the last two decades than the Steelers.

While the Cardinals may own the notion for most 1000-yard seasons, no team has turned out quality receivers like the Steelers, backing up the widespread belief of the team’s ability to turn receiving prospects into gold.

Another incredible feat to note is that the team has turned out successful receivers from all rounds of the draft. Whether it be in the first round with players such as Burress or Holmes, the second round with JuJu Smith-Schuster, the third round with Mike Wallace or the sixth with Brown, the Steelers have simply had a next man up mentality.

Now here is the kicker – the Steelers might still not be getting the credit they deserve. Our target range for the data not only leaves out stars such as Hines Ward, drafted in 1998 but it has still not accounted for the current receiver room. Smith-Schuster has at least one more year to add to the tally. James Washington is coming off of his best year yet. Diontae Johnson’s ceiling is sky high and 2020 draft pick Chase Claypool has yet to begin his journey as a Steelers’ receiver.

The Steelers have gone through two head coaches and numerous wide receiver coaches throughout the last two decades but the production has not stopped. This is a testament and a job well done to the team’s scouting department, which has been able to identify and pluck out receivers with a high ceiling. If schools like Clemson want to be known as a wide receiver university for the receiver talent they deliver at the collegiate level then there is no doubting that when it comes to an NFL level, Pittsburgh is the city all receiving prospects should want to be in.