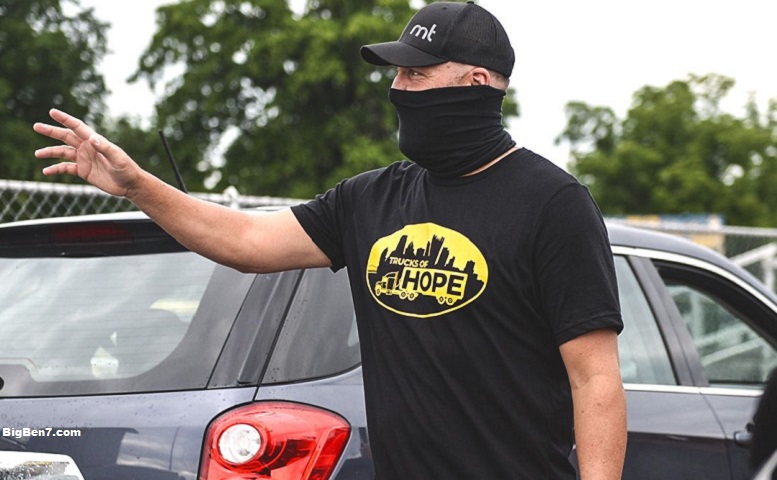 Did you see the most-recent pictures of Pittsburgh Steelers quarterback Ben Roethlisberger from the Farmers to Families and Convoy of Hope programs that he participated in this past week? If so, you must admit that the Steelers quarterback looks slim and trim and ready for the start of training camp next week. On Thursday, Ian Rapoport was a guest on 93.7 The Fan and during his interview, he was asked to comment on what he’s heard about Roethlisberger and his rehab and him coming back from the elbow injury in 2019 that cost him nearly all of last season.

“It’s about love and about helping others.”

At today’s food distribution through the Farmers to Families Program & @ConvoyofHope in New Castle, @_BigBen7 explains why it’s important to him and his family to find ways to help those in need. pic.twitter.com/2R5ClD8N7Q

“I will say I’ve heard a lot about how well he’s doing,” Rapoport said. “Like, I remember hearing in maybe like April that he was like firing the ball and they had to hold him back because he was doing so well. And maybe I sort of like didn’t give this as much attention as I should have, but I guess he’s been in pain for a while. So, the fact that he’s not in pain with his elbow now, he feels amazing. And then I started hearing that he was in really good shape and sort of like at this point, I mean, everyone’s always in really good shape before August, right? Like, so you’re kind of like, all right, that’s what everyone says. I think Ben might actually [be].

“And this is sometimes what happens with players when they throw themselves into rehab and all they have to do is just get themselves physically ready, sometimes they come back stronger because it’s like a hyper, hyper focus on everything that’s wrong, so you take care of everything else. That seems to be the case with Ben. I really do feel like this is going to be a, absent injury, I feel like this is going to be a big sort of bounce back year for him. He’s always been a weird freakish athlete. The fact that he is in shape and looks really good now, probably is a pretty good sign.”

Personally, I don’t think Rapoport has any more insight into Roethlisberger and his current physical condition than what’s already been posted on this site over the last several months. In fact, I really wonder if Rapoport has even seen any of the most-recent pictures of Roethlisberger. What Rapoport has seen, however, are the comments that were made earlier in the offseason by NFL Insider Jay Glazer and that was evident on Thursday in his final thoughts on Roethlisberger’s current condition and outlook for the 2020 season.

“And that’s why to me, when that story came out about, like, how he throws a ball and then drinks a beer, I’m like, that’s not true,” Rapoport said. “It’s just, it’s like, yes, he was a little rounder than you would like, but he is an amazing athlete and I’m way past judging him off what he looks like. Now the fact that he’s looking a little skinnier, I’m like, all right, maybe he’s in pretty good shape now.”

Personally, I think Roethlisberger looks great as July comes to a close and quite honestly, looks quite similar to the way he looks every year at the start of training camp. The beard he sported last season, along with the bulky winter sideline gear, obviously made him look heavier and probably a lot heavier than he actually was. Maybe he did get a little rounder early in the offseason while recuperating from his surgery. If he did, that little roundness appears to be gone now.

As for how Roethlisberger’s elbow and arm will be moving forward, we’ll find out for sure very soon with training camp about to get underway. I’ve had no reason to worry about Roethlisberger’s arm or elbow since he had surgery and until I hear anything to the contrary, I expect the Steelers quarterback to be just as good as he was prior to suffering his injury.