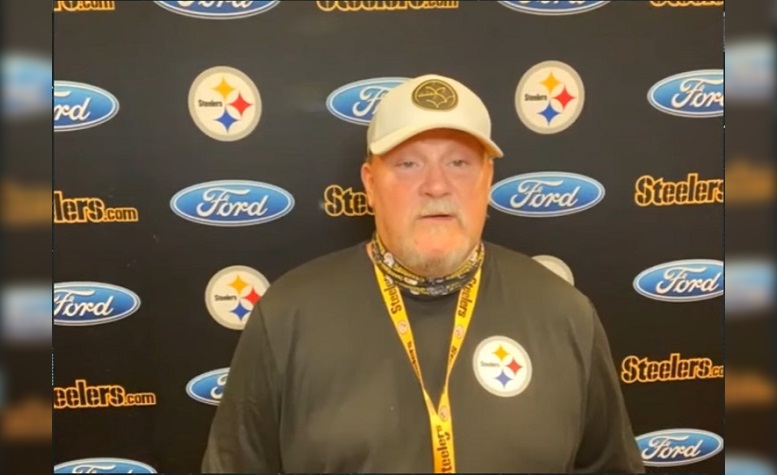 The Pittsburgh Steelers added two young offensive skill position weapons in this year’s draft in the form of wide receiver Chase Claypool and running back Anthony McFarland Jr. and with no minicamps or OTAs this offseason to get them up to speed with, it will be a huge chore to get both involved in the offense sooner rather than later as rookies. On Wednesday, Steelers offensive coordinator Randy Fichtner met with the media via a Zoom call and during his session he was asked to disclose any
preliminary plans of how me might like to use Claypool and McFarland in the offense in 2020 and if he thinks it might be difficult to assimilate them into it in such a limited time.

“Well, I think that, in general, is going to be the question,” Fichtner said. “You know, what generally takes a young guy out of play early is between the ears, quite honestly. It’s never really the talent, it’s not the physicality. It’s not that, they all belong. It’s how comfortable and how quickly they can understand how to do what you ask them to do. I think one of the things you’d want to do will be quickly as best possible find out what they do well, what they understand and then utilize that as much and as often as you can. So obviously any young guy, the more you can do comes into play.”

When it comes to Claypool and McFarland both being able to do more, the former certainly can as he was a fantastic special teams player in college at Notre Dame and especially at the gunner position on the punt coverage team. As for McFarland, while he wasn’t given the opportunity to be a punt or kickoff returner in his two years at Maryland, he has the skill set to do one or both at the NFL level with the Steelers.

“These are two guys that have shown the ability to help football teams on special teams and so if that’s the case, man, I mean you’re going to have these guys whether they’re ready offensively or not the first game of the year, possibly available to you,” Fichtner said. “And now you can use them and do the things that they do best and maybe in somewhat of a limited role. But I don’t want to put that ceiling on any one of them, because quite frankly, just the couple of days that we’ve worked with them, there’s some signs of maturity and that’s what’s exciting.”

It will be interesting to see how quickly both Claypool and McFarland are able to start practicing with quarterback Ben Roethlisberger once the team puts the pads on in the middle of August. In the meantime, it will also be interesting to see if the Steelers carrying a 90-man roster, if indeed that’s the plan for the next several weeks, results in Claypool and McFarland being split from Roethlisberger on a different squad of players because both are rookies.

So, what are Fichtner’s reasonable expectations for players such as Claypool heading into Week 1 of the 2020 season?

“Well, I mean, to be fair I would hate to put him in that situation, but I don’t want to put a ceiling on him,” Fichtner said. ‘He’s too big, strong and sharp. You never know. development of all young guys sometimes takes time. I saw JuJu [Smith-Schuster] when we first got here. I’ve seen Mike Wallace when he first got here. AB [Antonio Brown] when we first got here. All the guys. Emmanuel [Sanders]. They all kind of move and mature at the right time. And when it happens, it happens for the good, and it happened with Diontae [Johnson] last year.

“You know, I would’ve loved to not have to play Diontae as early as we even played him last year, but he was growing and developing. Great example. He missed the rookie minicamp with the hamstring, and then he missed most of the OTAs. That’s a good case point right there. Yes, he was here in a physical meeting. Yes, he got to watch things. These guys don’t get to even do that this spring.”

In the end, Fichtner made it clear on Wednesday that while he doesn’t want to put early limitations on what each offensive rookie can do and if each can possibly help the team sooner rather than later, he’s not expecting the real sooner side of it just the same.

“So, you know, when you’re really talking about where they can help you, again, I’m rooting that they can help us immediately right out of the box,” Fichtner said. “But I’ll be honest. I’m not counting on it. I don’t think it would be prudent to do that. But I do know at some point through this journey and probably early, just given the fact that in what I’ve seen in just a couple days and his [Claypool’s] look in his eye and his intelligence level, it would be reasonable to think it might happen earlier than later.”