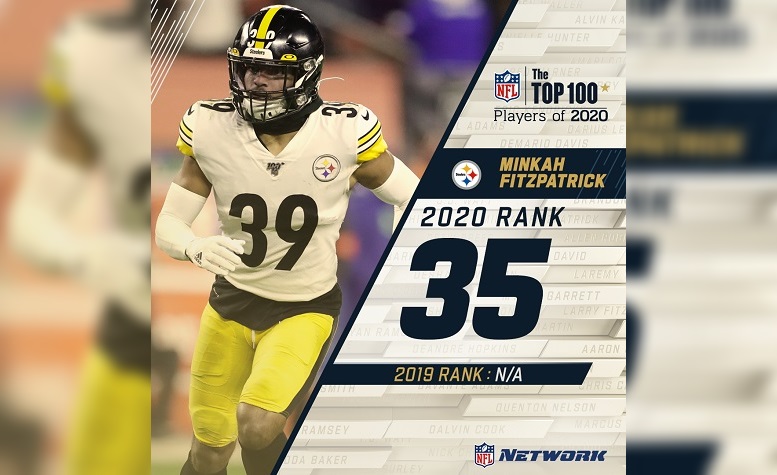 The NFL Network revealed players ranked 40-11 Tuesday night as part their annual Top 100 rankings show, and another member of the Pittsburgh Steelers defense was included in that set of 30 players for 2020.

Steelers safety Minkah Fitzpatrick is ranked 35th overall in the Top 100 this year after registering 5 interceptions in 2019. Fitzpatrick also recorded a career-high 69 total tackles in 2019 to go along with 9 passes defensed, two forced fumbles and three fumble recoveries in the 16 games that he played in last season. He scored two defensive touchdowns in 2019 to boot on his way to being selected to his first Pro Bowl and being named First-Team All-Pro for a first time.

This marks the first time that Fitzpatrick, who was originally selected by the Miami Dolphins in the first-round of the 2018 NFL Draft out of Alabama, has made the NFL Network’s Top 100 players list and it’s not likely to be his last.

The Steelers acquired Fitzpatrick in Week 3 of the 2019 regular season via a trade that included Pittsburgh giving up their first-round selection in the 2020 NFL Draft.

With Fitzpatrick now on the Top 100 board for 2020, that leaves Steelers outside linebacker T.J. Watt as the lone remaining Pittsburgh player left to be ranked. On Sunday, it was revealed that Steelers defensive tackle Cameron Heyward is ranked 84th overall in the Top 100 players for 2020.