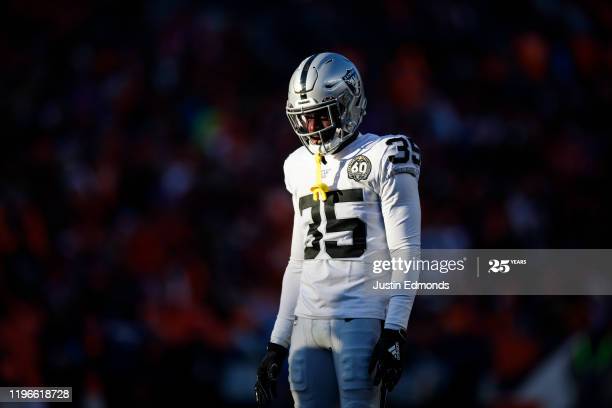 Yesterday, the Pittsburgh Steelers added reinforcements to one of their weakest positions on the roster depth wise, signing veteran safety Curtis Riley to what can be safely assumed is a one-year, minimum salary benefit contract.

Even before diving into the tape, bringing in Riley made a lot of sense. Minkah Fitzpatrick is a star and Terrell Edmunds is improving – slower than we might like but improving – but behind them, there was little. Jordan Dangerfield has barely seen the field on defense the past two years, capped as a box/specialty third safety who has played FS before but doesn’t have the ideal skillset for it. Marcus Allen couldn’t crack the 53 man roster in 2019 while Antoine Brooks Jr. is a rookie playing catchup after losing the offseason and preseason.

Riley is 28 years old with 19 career starts in the league, including a 16 game starter in 2018 with the Giants. He has five career INTs, four of those coming with the G-Men. He can play both safety spots, free and strong, and when the Raiders signed him last August, DBs coach Jim O’Neil they specifically had him in mind as the post (free) safety.

“We were looking for a rangy post safety,” O’Neil said via the Las Vegas Review-Journal. “I watch a game, and Curtis Riley has an interception. I watch a game, he runs … and makes a good tackle. I watch another game, he makes a hell of a stream play, chasing somebody down the field. So I had the front office look him up, and it turns out he was a free agent.”

Here’s an example of him playing the free/post safety. 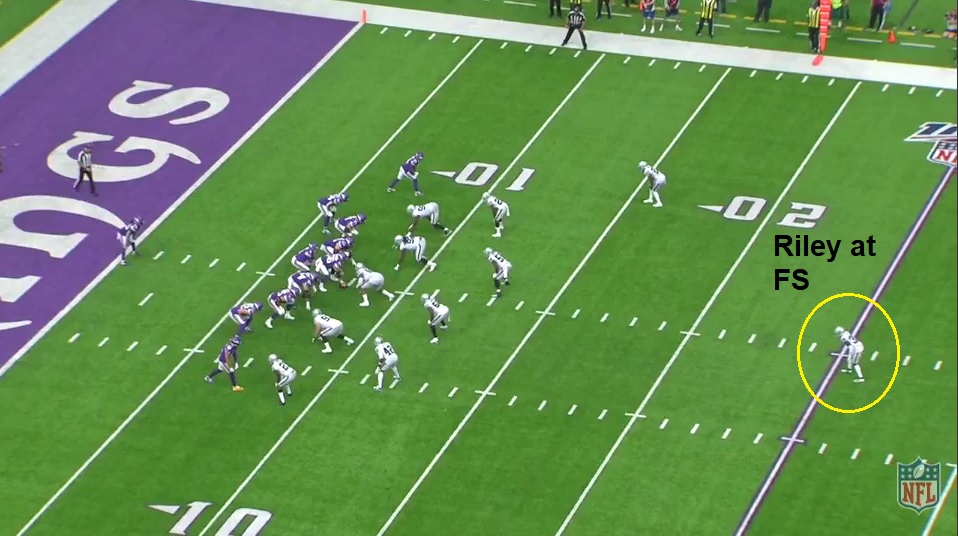 That versatility and experience alone makes him a worthwhile signing.

But there’s of course lots more to cover than that. So let’s break down his tape, the good and the bad.

As mentioned up top, Riley’s versatility is a bonus. This team lacked good safety depth options, especially free safeties, and Riley is going to move to the top of the pile. He can also line up over slot, a former cornerback who has the background to cover, though man-to-man duty isn’t his strongest suit, as we’ll point out later.

Riley normally doesn’t lack a “want to” as a tackler. He’s a run and hit safety willing to sacrifice his body and when he lands a blow, it makes an impact. He’s physical around the line of scrimmage and attacks the run as a blitzer. Overall, I like the energy he plays with. He’s #35 in all these GIFs.

I like his aggressiveness in coverage, willing to take chances and drive on the ball, and he has a good feel for processing routes as an underneath zone/robber defender. He’s an above average athlete with enough foot speed to make plays in the open field and run with receivers in man coverage. Riley shows good hands and goes after the football at his highest point.

He also has special teams value. Been a multi-phase guy, running down kicks, on the field goal block team, the punt return unit. Last year with Oakland, he played over 60% of their special teams snaps.

While Riley is a willing tackler who will throw his weight around, his technique is severely lacking. He struggles to take good angles to the ball, which will bring back ugly memories of Mike Mitchell (and Riley isn’t as big and impactful of a hitter like Mitchell).

It’s a bit difficult to pinpoint the exact issue Riley has but I’d put it in a couple buckets.

1. Not attacking inside/out, the near hip of the runner
2. Breaking down too early
3. Failing to drive through the ballcarrier

Couple examples of what I’m talking about.

Take this 2018 play against the Panthers. Christian McCaffrey busts into the open field. Riley comes from his deep half spot but takes a terrible angle. Defenders have to play inside/out, working to the runner’s near hip as his angle. That prevents the cutback and helps funnel the runner to your help. Instead, he attacks McCaffrey’s outside hip and allows the cutback instead of funneling McCaffrey inside and keeping him to his help. Results in a missed tackle. 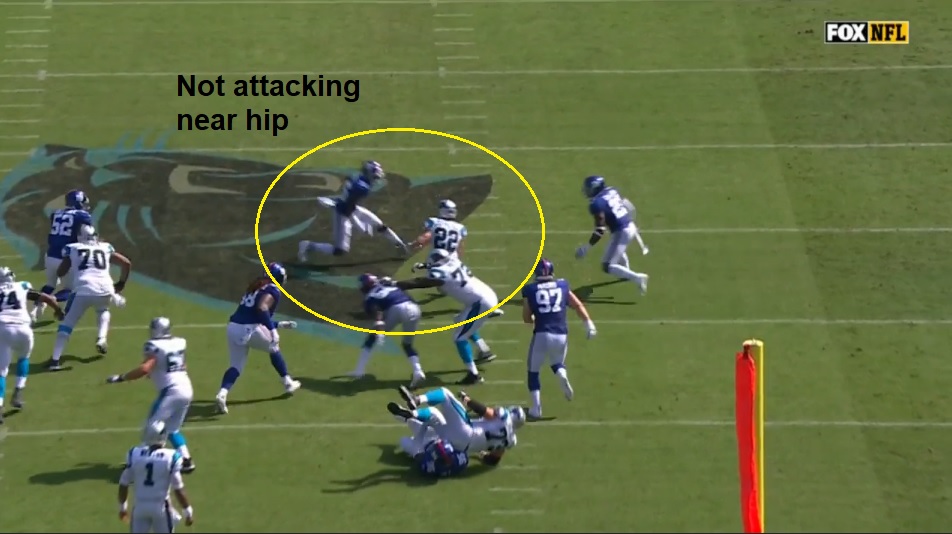 Or here against the Vikings. Riley shoots too low on Alexander Mattison, dropping to a knee. Mattison, to his credit, pulls off an impressive hurdle into the end zone. But Riley needed to aim higher, keep his head up, and drive through Mattison instead of going low.

Overall, Riley needs to do a better job of driving through contact. Same shoulder/same knee, head across and drive through the ball carrier. He likes to fling himself into tackles and sometimes it’s effective but it also makes him prone to falling off runners. He isn’t such a big/powerful player either that it gets the job done like a Derwin James type player could.

In coverage, he’s much better in zone than man. You don’t want this guy covering man-to-man. Back-to-back reps against the Vikings show that. On the first rep, he loses rookie TE Irv Smith on this in-breaking route, slipping and giving up more space than he already was. On the next rep, Adam Thielen cooks him on a double-move for a long touchdown. Thielen is a tough assignment for anyone, much less a safety, but you get the idea this isn’t Minkah Fitzpatrick in coverage.

While he had four INTs with the Giants in 2018, his takeaway reel isn’t the most impressive one. Here’s a cut-up of all four. Maybe only the one against the Panthers is higher quality and even then, there was miscommunication between Cam Newton and the wide receiver. Wideout was running a double-move that Newton wasn’t throwing.

There’s also a very ugly effort play that got him benched against the Cowboys. I don’t know what’s going on here but this is one of the worst tackle attempts – I hesitate to even call it that – that led to a touchdown.

New #Steelers S Curtis Riley was immediately benched by the Giants after this missed tackle attempt late in 2018 season. pic.twitter.com/rbs0dRIjsy

The tl;dr version of what I saw from Riley.

– Above average athlete with enough speed to run with most receivers
– Aggressive on the ball and ball carrier, best coming downhill
– Versatile, played all over the secondary with multi-facet special teams experience
– Good hands and high points the football in coverage
– Effective blitzer and makes plays around the LOS

– Poor finisher and tackler, angles and technique are poor, needs to keep eyes up, wrap up, and drives through the ball much more consistently
– Struggles in man coverage, even against tight ends, struggles to stay in-phase at break point
– Moments of poor effort
– INT numbers less impressive on tape than box score

On a scale of Damian Stafford to JJ Wilcox, this is closer to the Wilcox side of things. Like I wrote at the top, this team needed additional safety depth and especially free safety help. They really didn’t have anything there. Riley doesn’t move the needle significantly but he’s veteran depth in a messy offseason at an area of extreme need. Putting his signing in perspective, still happy with bringing him in, but grabbing Riley wouldn’t stop me from trading for a much better player like say, the Jets’ Marcus Maye. Acquire him and have a safety depth chart of Fitzpatrick, Edmunds, Maye, Riley, and Dangerfield? Then you have a really impressive unit.