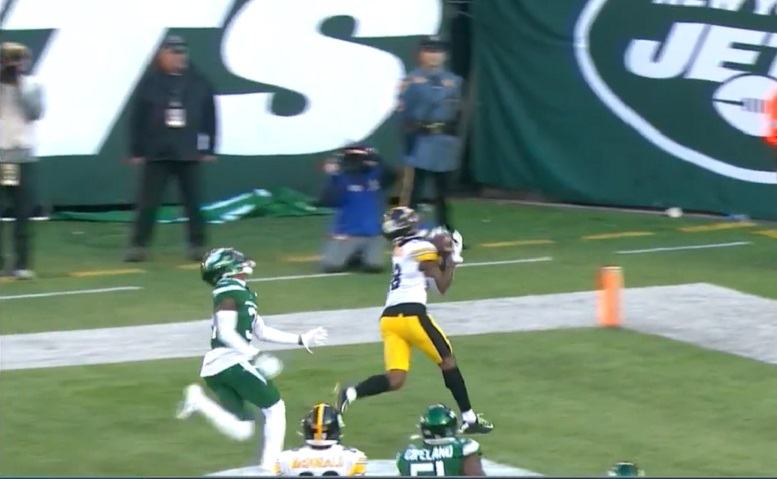 One of the players about whom fans are the most optimistic heading into 2020 is Diontae Johnson. A third-round pick out of the MAC last year, he came in despite dealing with injuries throughout the offseason and produced when he wasn’t supposed to—and with vastly inferior quarterback play.

By season’s end, he was the only wide receiver on the team to play in all 16 games, leading the team in receptions with 59 and receiving touchdowns with five. His 680 receiving yards were also the second-most on the team—and, it should be noted, the ninth-most yards by a rookie in team history. Nothing to sneeze at, especially given the circumstances.

So you might not be surprised to find that the young wide receiver was the NFL website’s candidate for the player on the Pittsburgh Steelers predicted to be the most improved in 2020. Analytics expert Cynthia Freulund writes:

PFF credited Johnson with 18 forced missed tackles last season, which tied for the most among wideouts. Couple Ben Roethlisberger’s return from injury along with Johnson’s elusiveness/season of experience in the Steelers’ system, and his potential makes him not only a threat defenses will have to account for but someone you should earmark as a potential fantasy steal, as well.

Entering the 2019 season, Johnson was not supposed to be a major contributor behind JuJu Smith-Schuster—coming off of a breakout year and taking over the number one receiver role from Antonio Brown—a second-year James Washington, and Donte Moncrief, a veteran signed in free agency to take over a starting role.

Moncrief quickly flamed out, probably thanks in part to a busted finger he suffered in training camp, which immediately upped Johnson’s playing time. He had rookie struggles of his own, and even talking about hitting a rookie wall late in the year, but he continued to find ways to contribute.

According to advanced statistics, the former Rocket is already among the better wide receivers in the NFL in creating separation in his routes, meaning that he gets himself open a lot. Ben Roethlisberger is probably salivating over the prospect of working with somebody like that again with Brown long off the deep end.

Smith-Schuster and Washington, and newcomer Chase Claypool, all have their skills, but where Johnson has all of them beat is in his route running, and that has become the most important trait at the position in the NFL. The guy who’s open gets the ball. That’s his ticket to a big season: consistently being the open man.