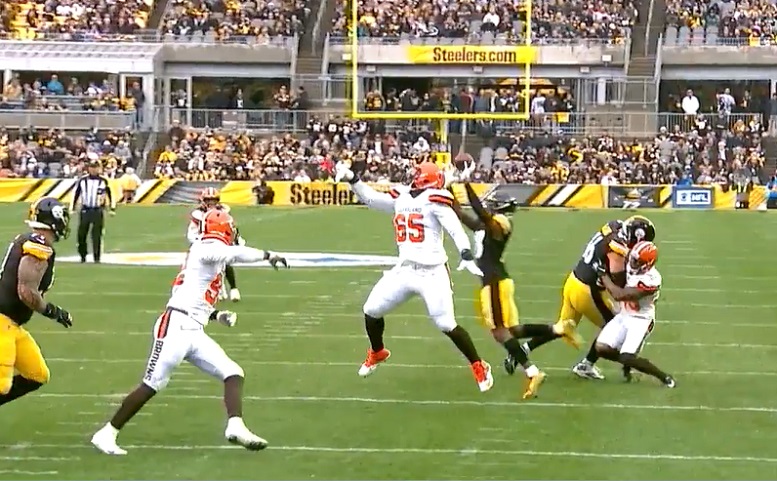 This series will move forward with a look at Johnson’s targets in the Steelers Week 13 home game against the Cleveland Browns. In that game, Johnson had five targets of which he caught just one of them for 14 yards. His average targeted distance against the Browns was 19 yards past the line of scrimmage and his average completion distance on his lone reception was a mere 2 yards past the line of scrimmage. 12 yards were gained by Johnson after the catch against the Browns.

Johnson’s first target against the Browns in Week 13 came midway through the second quarter and on a first-and-10 play. On this incompleted pass, Johnson, who was lined up in the slot on the right side, released outside initially before running an angle route back inside. Johnson had plenty of separation on the route but the pass, which might have been ever so slightly tipped by Browns defensive lineman Larry Ogunjobi just after quarterback Devlin Hodges released it, went right off the wide receiver’s hands. It’s hard not to score this as a drop by Johnson. Had he managed to catch this pass from Hodges, he would have likely gained quite a few yards after the grab as he had a lot of open grass to work with.

Johnson’s second target against the Browns was another pass that should’ve been completed. On this first-and-10 play, Johnson ran a deep seam route out of a nasty split on the left side of the formation after first stemming the pattern to the outside against what looked to be quarters coverage. Johnson easily split the two Browns defenders on the route and had a step and a half on each. The deep pass from Hodges, however, hung up some and it caused Johnson to have to wait on it as to not overrun it. That wait allowed Browns safety Sheldrick Redwine time to get back in phase with Johnson and his smartly timed swipe at the catch point created a breakup. Had this pass been thrown a tad sooner and deeper, Johnson likely catches it and scores.

Johnson’s third target against the Browns probably should’ve resulted in a completed pass. On this second-and-10 play, Johnson, who began the play with a short return motion, ran a short corner route to the left side out of a nasty split and against a zone coverage. Johnson was open coming out of his break but had to wait for Hodges to release the football. The pass from Hodges was ultimately high and outside of Johnson and with two defenders bearing down on him from two different ways, Johnson was unable to catch the errant pass.

Johnson’s fourth target against the Browns wound up being an intercepted pass on a first-and-10 play midway through the fourth quarter. On this play, Johnson seemingly gave up on his deep seam route on the left side of the field at around 15 yards. Hodges apparently thought Johnson was going to continue deep against the zone coverage and threw the football 30 yards down the left side of the field outside of the numbers. Browns cornerback Terrance Mitchell easily tracked down the deep pass for the interception. To Johnson’s credit, at least he got back into the platy and eventually tackled Mitchell after a nice return.

Johnson’s fifth and final target against the Browns resulted in his only catch of the game and it came late in the fourth quarter on a third-and-5 play. On this play, Johnson, who is lined up originally on the right side and outside of a bunch, ran an underneath crossing route against man-coverage. Johnson had an easy release and was instantly open underneath because of a great pick by the two other players lined up in his bunch. Johnson caught the pass from Hodges on the other side of midfield and then proceeded to gain another 12 yards after making the uncontested grab.