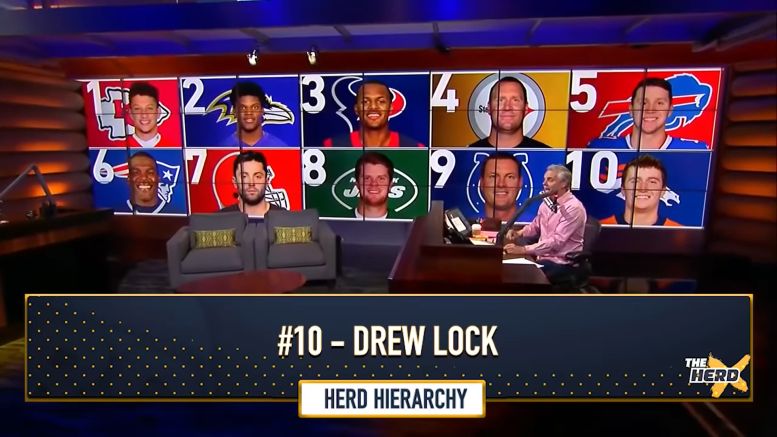 Colin Cowherd as an analyst can, at the best of times, be described as a mixed back. If you’re looking for potshots at the Cleveland Browns, he’s your guy, but let’s face it, he has more than his fair share of dubious takes, and I say this as somebody who only incidentally and occasionally comes across what he has to say. So basically, take it all with a grain of salt as needed.

But yesterday he put himself up to the task of ranking the top 10 quarterbacks in the AFC. Ben Roethlisberger did not crack the top three, but he was close. The three who made the Pro Bowl last season—Patrick Mahomes, Lamar Jackson, and Deshaun Watson—occupied the top three spots, but the Pittsburgh Steelers’ veteran gunslinger was number four.

“I’ll go with Ben because the last time I saw him play, he led the NFL in passing yards. He had over 5000 yards. And he’s still big and strong, and they have a great o-line, unbelievable front seven defensively, plus Minkah Fitzpatrick, good GM, so I like a lot of what he’s surrounded by”, he said. “But I think this morning, the last time I saw him play and what he’s surrounded by, I put him four, but not necessarily too far ahead of number five”.

Number five was Josh Allen of the Buffalo Bills, in case you were wondering. And the list was rounded out by Cam Newton, Baker Mayfield, Sam Darnold, Philip Rivers, and Drew Lock, in that order. The names left out would be Joe Burrow, Ryan Fitzpatrick (or Tua Tagovailoa), Gardner Minshew, Derek Carr, Tyrod Taylor (or Justin Herbert), and Ryan Tannehill.

So, okay, Roethlisberger is fourth in the AFC, with a strong top three. But where would he rank in the NFL? The NFC has Aaron Rodgers, Russell Wilson, now even Tom Brady, not to mention Drew Brees, Matt Ryan, Carson Wentz, Jimmy Garoppolo, and up-and-comers like Kyler Murray.

Under the best-case scenario, Roethlisberger could state his case for being the MVP this year. He put up big numbers in 2018, and arguably, he could be healthier this year than he was then, with his arm in better shape. He led the league in red zone efficiency. Perhaps he could be even better.

Or perhaps he will be worse. Perhaps he will look like an old man (relative to his profession) with a surgically repaired elbow. Perhaps he’ll come back looking great, but he won’t be able to hold up for the length of the season.