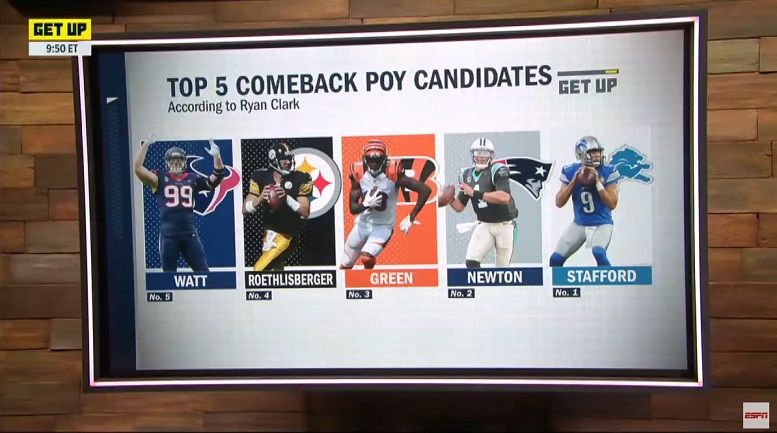 With a little less than a month to go before NFL training camps get underway, Pittsburgh Steelers quarterback Ben Roethlisberger remains the odds-on favorite at many online sportsbooks to win the annual NFL Comeback Player of the Year Award in 2020. One of Roethlisberger’s former teammates, safety Ryan Clark, also likes the quarterback’s chances of winning that award in 2020. That said, Clark doesn’t view Roethlisberger as the favorite to do so.

During a Wednesday morning interview on Get Up! on ESPN, Clark a longtime NFL analyst for the network, named off his top 5 candidates to win the 2020 Comeback Player of the Year Award and a bit surprisingly, he had Roethlisberger fourth on the list.

“My number four is Big Ben,” Clark said. “Why? Because I love big Ben and Big Ben’s a Steeler. But also, because JuJu Smith-Schuster comes back healthy. Now we have the Diontae Johnson, who stepped up [last season]. James Washington. You’re looking to be better in the backfield because you’re healthier.

“Also, this defense is stellar. So, what makes people win awards like this? Winning games. The Steelers are going to be extremely good. Big Ben is going to be healthier than we’ve seen him in the last year. And also, the last time he was fully healthy, he led the league in passing yards. He’s also motivated. Motivated to prove people wrong. motivated to win games. Motivated to show them [the Steelers] that they will right by not drafting a quarterback.”

Clark obviously included a lot of very good reasons for why Roethlisberger should be a candidate to win the Comeback Player of the Year Award in 2020. With that said, he still has Roethlisberger ranked behind Cincinnati Bengals wide receiver A.J. Green, New England Patriots quarterback Cam Newton, and Detroit Lions quarterback Matthew Stafford.

Personally, I think it’s a bit silly to have Green ranked higher than Roethlisberger and especially due to the fact that the Bengals are likely to have rookie quarterback Joe Burrow starting most of the 2020 season. For Green to wind up winning the Comeback Player of the Year award in 2020 it would seemingly take a minor miracle. As for the chances of both Newton and Stafford winning the award and being ranked ahead of Roethlisberger, I sort of get it. Even so, I think Newton is in a much better position than Stafford and thus I would swap those player’s spots with both being behind Roethlisberger.

Even though Clark might not have Roethlisberger as the favorite to win the Comeback Player of the Year Award in 2020, the other ESPN analyst that was included in the Wednesday morning segment on the topic, former defensive lineman Marcellus Wiley, considers the Steelers quarterback the favorite a month ahead of training camps getting underway and explained his reason why.

“I like all five of these guys but I’m going with Big Ben,” Wiley said. “Because first of all, Big Ben done lost weight. He went on keto, which I need to get back on, he looks great. The second thing is, when we look at what the Pittsburgh Steelers are right now, this was an eight-win team last year and I don’t even remember their quarterback’s names. Duck and Rudolph, that’s who their quarterbacks was. So, with that being said, you look at what Ryan talked about with JuJu coming back, James Washington coming on the scene, I think one of the most important things is James Conner in the backfield, because we know Ben was at his best when Le’Veon [Bell] was back there doing a lot, multiple out of the backfield. It will be Big Ben. I like the Steelers; I like the team better than all of the teams that we mentioned. Cam [Newton] is a strong second for me but I think Big Ben’s going to take it this year, R.C.”